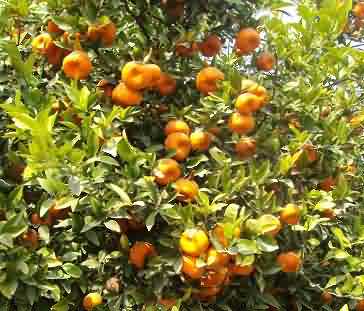 India ranks fifth in the production of citrus fruit in the world. Other major citrus producing countries are Spain, USA, Israel, Morocco, South Africa, Japan, Brazil, Turkey and Cuba. It occupies third position after mango and banana a in the production of fruits in India. Citrus fruits originated in the tropical and sub tropical regions of South East Asia, particularly India and China. North East India is the native place of many citrus species.

In India, citrus is commercially grown in over 846 thousand ha with production of 7464 thousand MT. It is of particular interest because of its high content of vitamin C and refreshing juice. Of the various types of citrus fruits grown in India, orange (mandarin or santra), sweet orange (mosambi, malta or satgudi) and lime/lemon are of commercial importance. Lime or acid lime is also commercially known as 'Pati lime' or 'Kagzi lime'. Sweet orange is commercially important for production of palatable juice. In India, citrus fruits are primarily grown in Maharashtra, Andhra Pradesh, Punjab, Karnataka, Uttaranchal, Bihar, Orissa, Assam and Gujarat. In India, 250 species of insects and mites have been reported infesting different species of citrus. Citrus butterfly, leaf miner, blackfly, whitefly, psylla, scales etc. are the major pests that cause severe damage to the citrus crop. Majority of the insect pests occur at the new flush stage and damage the new growth thereby hampering the plant development.

Both the adults and nymphs of this pest suck the sap from the tender parts of the buds, leaves, branches and injects a toxic substance into them. The nymphs excrete white crystalline waxy pellets on which black sooty mould may develop which reduces the photosynthetic area. In case of severe attack leaves get distorted, curled up and ultimately fall resulting in complete defoliation of the plant. This pest acts as a vector for spreading the 'citrus greening' disease.

A number of natural enemies such as species of coccinellids and ladybird beetles attack the nymphs of citrus psylla. The pest can be satisfactorily checked by spraying the plants with Phosphamidon (0.025%) and Parathion (0.025%). Also application of Monocrotophos (0.025%) or Malathion (0.03%) or Dimethoate (1.5%) is useful during March  or with  the  appearance  of  the  pest  and  again  in  the  first  week  of September. Time of application may be adjusted with the appearance of the pest.

The caterpillar makes holes into the branches and weakens the tree. Presence of webby mass ofchewed wood particle and excreta of larvae conspicuously plastered on tree trunks is the clear indication of damage by these borers. The feeding of these pests causes interruption in translocation of cell sap, which adversely affect the growth and fruiting of the plant.

The pest is satisfactorily controlled by removing the webbing followed by plugging the holes with cotton wool soaked in the 2-5ml of Dichlorvos 76EC solution (20ml/10 litres of water) or inject kerosene oil. The holes are then sealed with mud. The best time for its management is September-October and the operation should be repeated in January-February.

This pest causes damages both in nursery and in grown up stages of the citrus plant. It the larvae attack tender leaves and feed in the epidermal layers of the leaf by making serpentine mines in which air gets trapped and gives them silvery appearance. The affected leaves turn pale yellow, get distorted and crumpled.  Such leaves gradually dry and die away. The attack of this pest also encourages the development of citrus canker disease. 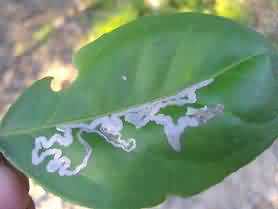 To keep the pest population under check, pruning of all the affected parts during winter should be done. Spraying the plants with Methyl Demeton (0.03%) and Phosphamidon (0.035%) at the emergence of new leaves is highly beneficial. Application of Phorate 10 G (2.5 kg a.i./ha) applied one day before planting is effective in reducing the larval population of leaf miner.

These nymph and adults suck the sap of the plants and during this process, secrete honeydew due to which sooty mould develops on the leaves. Sometimes, the infestation is so severe that the whole orchard looks black. Fruits turn black in colour and have insipid taste. The attack is more intense on the shady side of the tree.

Nymphs and adults suck sap from tender leaves and shoots. Affected leaves turn yellow, get curled, deformed and dry up. Growth of young shoots is adversely affected. Plant growth is stunted. Sooty mould is produced on honeydew excreted by aphids.  Infestation of aphids at the time of flowering is associated with reduced fruit set. Black aphids and peach green aphids are vector of citrus tristeza virus (CTV).

Population of this pest on citrus can be easily controlled by spraying the plants with Parathion (0.03%) and Malathion (0.03%). Also Monocrotophos (0.025%) or Phosphamidon (0.035%) effectively controls this pest. Spraying should be immediately undertaken as soon as the pest is observed. Conservation of coccinellid populations.

It is the most destructive pest in nurseries. The caterpillars feed on the young foliage at the nursery stage and also on young flushes of grown up trees. The caterpillar feed voraciously on leaf lamina leaving behind only the midrib. In case of severe infestation, entire tree is defoliated. The fully grown caterpillars are green in colour.

Hand picking of the larvae and spraying with Monocrotophos (1.5 ml/litre of water) is effective in managing the pest.

The moths are nocturnal in habit. During the daytime, they hide in fallen leaves and in weeds and become active at dusk and swarm in large numbers when citrus fruits are about to ripen. The moths continue feeding throughout the night and cause colossal damage. They pierce the ripened fruits and suck the juice from them.  Such fruits are exposed to the secondary infections of diseases and infestation of flies. The affected fruit usually falls within a few days.

Elimination of alternate hosts plants from the vicinity of the orchards (especially Tinospora cardifolia) and collection and destruction of affected fruits reduce the pest population. Uses of poison baits have proved useful. Effective bait may be prepared by mixing 15g lead arsenate and 450g molasses in 10 litres of water. A little vinegar may be added to it and the bait should be suspended from trees in shallow wide-mouthed containers. Bagging of fruits at small scale is effective. Creating smoke in the orchards after sunset. Fallen fruits should be disposed off as they attract the moths. Spray trees with 1 kg of Sevin 50 WP (carbaryl) in 500 litres of water per acre at the time of maturity of fruits.

The female  adult  fruit  fly  punctures  the  ripening  fruits  by penetrating  its needle  like ovipositor and  lays  the eggs  inside. On hatching, the maggots feed on pulp. Fruits at colour break stage are more prone to its damage. Infested fruit shows many dark green depressions due to punctures caused by insertion of ovipositor by female fly.  Later on, the damaged area around the punctures become enlarged and yellow.  On squeezing the infested fruit, a number of jets of juice come out, as there are many holes on a single fruit. Rotting of the fruit occurs due to fungal  and  bacterial  infection  through  the  puncture  hole  and due  to  feeding  by maggots,  resulting  in  premature  fruit  fall. 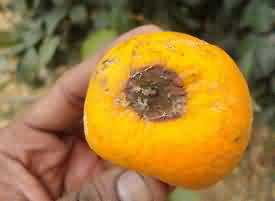 Collection and destruction of infested fruits reduces the insect population. Use of flytraps containing 1% Methyl Eugenol and 0.5% Malathion mixed with sugar syrup two months prior to harvesting is effective.

The mites damage the fruits by causing russetting and renders the fruits unfit for export. The insects feed on the leaves and produce multiple grey spots. The affected leaves defoliate. 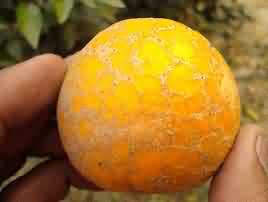 Citrus scales are of two distinct types-armoured scales, which have hard cover separate from the body providing protection to the body underneath. The soft scales the have no separate cover but sometimes a hard skin or a protective waxy secretion. The armoured scales damage the fruits and form as blemishes at low levels of infestation and in sever cases, they damage the tree badly. The soft scales secrete honeydew on which sooty mould fungus grows. A soft scale become serious when there is poor light penetration due to over crowding and waterlogged conditions.

Hard armoured scales are difficult to manage. However soft scales are effectively managed by spraying Monocrotophos (0.1%).

Nymphs and females suck sap from leaves, twigs, tender shoots, and from fruits at the base near the fruit stalk. Besides they also excrete honeydew on which sooty mold fungus grows, giving the plant a blackish look. Flowers and fruit dry up and fall. They also damage citrus nursery seedlings.  Black ants are associated with mealy bug infestation and number of ants can be seen moving up and down on the trees infested with mealy bugs   . 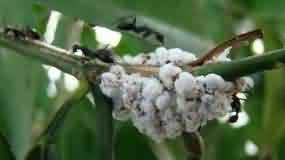 Mealybug on twig of young plant

Management: Do not grow tall crops like cotton, bajra, maize, berseem, okra and creeper like vegetables in the orchards. Regularly monitor the infestation of trees by this insect. Sanitation  of  the  orchard  is  extremely  important  as weeds act  as  additional  hosts.  Uproot and destroy congress grass and castor plants in the vicinity of the orchards. Do not allow the branches of trees to touch the ground. Destroy ant nests in the orchards. Drench  spray  of  1875  ml Durmet/Dursban/Coroban 20 EC (chlorpyriphos) in 500 litres of water first on the appearance of  the  pest  and  repeat  the  spray  15  days  after  first  spay. Other trees like papal, kikar, amaltas and ornamental plants like shoe flower and roses should also be sprayed.

Thrips are minute insects but can be seen with naked eyes.  They cause  damage  to  flowers,  leaves  and  young  as  well  as  grown-up fruits by  lacerating,  rasping  and  sucking  the  cell  sap.  The attacked flowers dry up and shrivels. On leaves, two whitish lines parallel to the midrib can be seen.  Leaves become cup shaped, leathery, distorted and wrinkled.  Thrips damage in nursery cause stunted growth of plant.  Silvery-white  irregular patches and  a  circular  ring appear  around  the  neck  of  fruit  is  a  peculiar  symptom  of  thrips damage  on  fruits.  Fruits become discoloured, thereby reducing the consumer preference for such fruits.

(circular ring like pattern around the neck of fruit)

Email:  This email address is being protected from spambots. You need JavaScript enabled to view it.