Codling moth (Cydia pomonella) is globally considered as one of the serious insect-pest of deciduous fruits in almost every apple growing regions of the world. In India this pest is restricted to cold arid region (Ladakh) of Jammu and Kashmir State.

This pest is believed to have entered into Ladakh from Pakistan and Afghanistan (North West border) and created havoc to the apple orchards of the region and a big menace to the growth and development of apple industry in the area. Presently this pest is the most persistent, destructive and difficult pest to control among the insect-pests of apple fruits.

In Ladakh, it is widely distributed in all the fruit growing areas viz; Karkichoo, Mangbore, Hardass, Sainikund, Batalik, Dah, Hanoo, area of Kargil district and Lamayuru, Skurbuchan, Khatlse, Ymisgam, Basgo, Saspole and Nimmu areas of Leh district. To avoid and restrain its spread to the neighboring apple growing areas, specifically in Himachal Pradesh and Kashmir valley, the marketing and supply of apple produce from Ladakh region is restricted through various quarantine checks.

Nature and extent of damage

Codling moth has a remarkable ability to adapt to a wide range of climatic conditions and geographical locations. Being a multi-volatile species with facultative diapauses it can complete one to five generations in a year depending upon latitudes and elevation. Codling moth passes the winter as full grown larvae in diapauses (winter resting stage) inside a thick silken cocoon. They usually spin their cocoon under loose bark on the trunks of apple trees, under shelters about the base of the trees, or on the ground nearby. They remain dormant through the winter and are able to withstand severe and freezing temperatures. In mid spring, the larvae change in to pupal stage and adult moths emerge after two to four weeks. In Ladakh, codling moth has well synchronized its life cycle as per the prevailing conditions of the area.

Figure 1 Damaged fruits of Apple due to codling moth infestation

Codling moth damages fruits by stings where larvae bore a short distance in to the flash. The deep entries occur when larvae penetrate the fruit skin, bore into the core and feed on seed cavity. Larvae may enter the sides, stem end or calyx end of the fruit. Entries into the calyx are often difficult to detect without cutting into the fruit. It is reported that the infestation of codling moth in apple was 49.7% and 42.5% in Kargil and Leh districts, respectively. It is estimated that about 60 to 70% loss is being observed in apple industry each year. If left unchecked, the extent of infestation may be up to 90% in apple. Moreover its alternate host in Ladakh is probably the Apricot, which is considered as the basic commercial fruit crop of the region.

Codling moth in cold arid region of Ladakh needs a sustainable approach of integrated pest management basic on scientific principles to achieve desired results. Biological control alone can't keep codling moth populations below economic level. Similarly chemical pesticides or cultural practices are not effective alone in controlling codling moth. The studies carried out in various apple growing parts of the world have devised sufficient technologies for its efficient management. A proper strategy is however needed involving local community/growers for implementing the programme to eradicate this noxious pest. Eradication is the elimination of all individuals of a species from a geographical area. The attempts involve chemical, biological and cultural control or a combination of all these tactics. An integrated management schedule involves the following components: 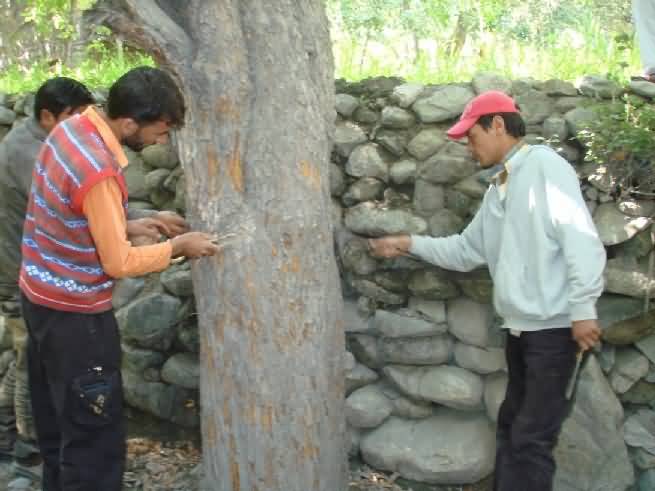 Figure 3 scrapping of the bark

Conclusion
Apple industry in the cold arid desert region (Ladakh) has enough potential for commercialization, if the strategies for the efficient integrated pest management for codling moth are carried in a scientific manner. Besides there lies a dire need to extend the evolved technologies among the target communities (growers) to provide a breakthrough in the horticulture sector of the region.