The soybean [Glycine max (L.) Merill] is one of the oldest cultivated crops of the world. It also is known as “Golden bean”, “Miracle crop” and “Crop of the planet” etc., because of its several uses. The first record of this crop is available in Chinese literature, where it is mentioned to be one of the five sacred grains of china. The middle and lower Yellow river valley in China has been reported to be the place of origin (Chang, 1980). Since the first century AD, this ancient domesticate became widely introduced and land races developed in China, Korea, India and other parts of Asia (Zeven and De Wet, 1982).

Soybean is one of the most important crops in the world, with great economic and social value due to the fact that it is a source of protein for feed at low cost (Fortunato et al., 2007) and soybean oil is highly digestible and has almost no saturated fats. In North east India, soybean is attacked by about two dozens of insect pests among which leaf folders, Nacoleia vulgalis Guen and N. Diemenalis Guen are one of the destructive insect pests at medium altitudes of mid hills of Meghalaya (Sachan and Gangwar, 1980). These pyralid leaf folder (N. vulgalis Guen, N. diemenalis Guen) and stem fly (Ophiomyia phaseoli Tryon) cause significant yield loss of 9.3% during kharif season (Azad Thakur, 1985). The detail description, nature of damage and control measures is given below;

The larva is whitish green (Fig.1) remain within folded leaflet and scrap chlorophyll (Fig. 2) leading to the complete dry-up of leaves, causing upto 9.3 % yield loss. The economic injury level (EIL) for leaf folders is 8-9 larvae /plant. The larvae feed on the leaves by folding them either from the tip inwards or along the mid-rib and webbing the folds with the help of white resinous substance exuded by the larvae. Webbing of several leaves especially at the apical end of the braches is very common.

The adult moth of N. vulgalis is creamy yellow to light brown with oblique black wavy lines on both pairs of wings and the adult of N. diemenalis is yellowish brown covered with black blotch on both the pairs of wings. The pest is found active in second fortnight of July to last week of September. 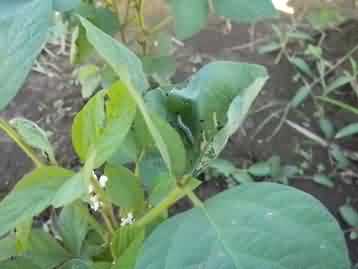 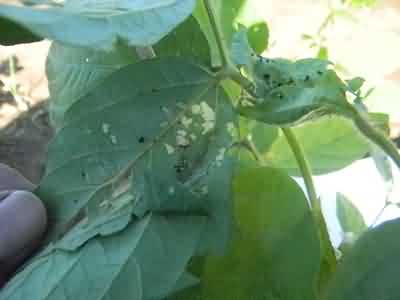 It is a serious pest on soybean causing 15.41 % yield loss.  The infestation starts from 15-20 days after sowing. Infested plants wither above the point of attack (Fig.3) and finally dry-up.

As soon as soybean cotyledones emerge from the soil, small fly bores the upper side of the fresh cotyledone and lays eggs there. In unifoliate and trifoliate leaf the female fly (Fig. 4) makes several puncture by the ovipositors and feed from the oozing cell sap. These punctures look like yellow spots.

The maggot travels to the main stem from the cotyledone. The maggot pupates inside the stem. The adult emerges after the damage has already been done. Due to the maggot feeding the young plant wilt and die. 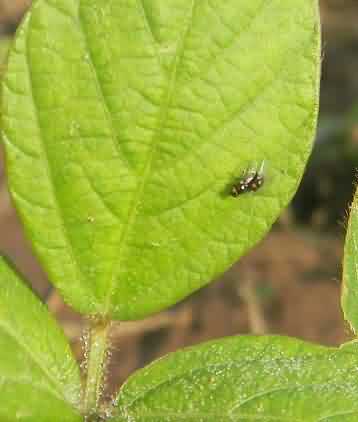 Bean beetles (Epilachna vigintioctopunctata, E. varivestis and Cerotoma sp.)  are of minor importance and infest the crop in the first week of July and continue to damage the crop upto last week of August. The grubs and adults feed on growing portion of the plant, thereby reducing the photosynthetic area of the leaf.

The aphids (Aphis craccivora) also cause damage to the crop and its population gradually increases from second fortnight of July to second fortnight of August. Bihar hairy caterpillar (Spilosoma obliqua) and tobacco cutworm (Spodoptera litura ) also infest the crop.

Inter cropping of soybean with either maize or rice is recommended to check the major insect pests like leaf folder and stem fly and to enhance natural enemies population in soybean ecosystem.

Bio-control of insect pests in soybean

Natural enemies like coccinellids and spiders also found on soybean crop predating on soft-bodied insects. The extent of natural parasitization in the field ranges from 18-21 %. Chalcid fly (Brachymeria lasus), Walker (Chalcididae: Hymenoptera) and a braconid Ascogaster sp. (Braconidae: Hymenoptera) parasitize and controls the leaf folder population to some extent.

Treatment of soybean seed with Imidachloprid @ 7 ml/kg seed followed by two sprays of fipronil @ 0.4 kg ai/ha, each at 15 days interval after 45 DAS are effective against leaf folder, semi-looper and stemfly.

Application of carbofuran @ 1 kg. ai/ha in split doses @ 0.5 kg a.i./ ha each, one at the time of sowing and the other at 45 DAS controls stemfly effectively.

*Email: This email address is being protected from spambots. You need JavaScript enabled to view it. (Corresponding author)