The maize is grown in a wide range of environments, extending from extreme semi-arid to sub-humid and humid regions of India. Maize is considered a promising option for diversifying agriculture in upland areas of India. It now ranks as the third most important food grain crop in India. The crop is also very popular in the low- and mid-hill areas of the western and north eastern hill (NEH) regions (Joshi et al., 2005).

In NEH region of India, maize is primarily grown under jhum land and terraced area. This crop is infested by large number of insect pests, which cause severe damage from germination to harvest resulting into low yield. Maize cob borer and stem borer are the major pests of maize. Termites, ear cutting caterpillars and field crickets are also found in the early stage of crop growth.

The cob borer moths emerge during the third week of June and the egg laying starts two days after eclosion, at cob initiation stage and continues up to 80 days after sowing.  The adult female lays 70-80 eggs singly on the base of the cobs between two cob sheaths.

The eggs are small cream colour and hatch in 5-8 days. The newly emerged larvae puncture the cobs and excrement on the cob is the clear symptom of damage by cob borer.  The presence of 3-5 larvae per cob is sufficient to damage the cob completely.

Total life cycle of the pest is 45 days. There are four larval instars over a period of 28-30 days.  Pupation occurs within the cob or between the cob sheath and pupal period ranges from 6-8 days. Adult male lives for 8-10 days and female lives for 10-15 days.

There are three to four overlapping generations from July to end of the September.  The late sown crop suffers heavily compare to early sown crop.  Larval excrement material and webbing is clearly seen on damaged cobs. The pest damages the cobs up to 34.2%.

Grown up larvae produce bigger holes in the whorl leaves, the severe attack results in drying of central whorl of the plant, which is called ‘dead heart’ (Fig 2).

The larvae also damage the emerging tassels, silk and developing grains on the cobs and pupate inside the stem. This is the most serious pest of maize and causes up to 70-75 per cent damage. 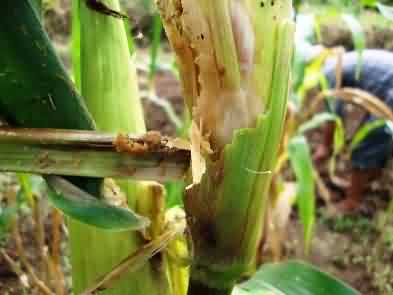 The full-grown caterpillar is stout, 4 cm long and dusky brown in color with pale/brown longitudinal stripes, the dorsolateral stripes being broken into spots.

The outbreak of this pest occurs suddenly and farmers generally notice it after it has already caused considerable damage.

The caterpillars generally feed at night and hide in whorls of plants during the day. The caterpillars march from field to field and voraciously feed on foliage. They appear after the heavy rains or early floods.

Both apterous and pterous aphids infest the upper half of the plant. Generally, this insect is very active during the rabi season. Long dry spells increase the incidence of this insect.

Nymphs and adults (Fig. 3) suck the sap from the leaves/shoots and exude honeydew, on which a sooty mold grows, giving the leaves a black appearance and thus affect photosynthesis badly. 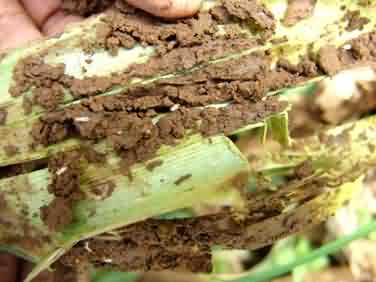 Termites are polyphagous pests. The worker caste is the damaging stage. This pest feed on roots of maize causing severe damage and leads to yellowing of plants (Fig. 4).

*Email: This email address is being protected from spambots. You need JavaScript enabled to view it.  (Corresponding author)