Cole crops are cultivated extensively in tropical and temperate regions of the world including India. The chief constraint in the production of cole crops is the damage caused by pest complex right from germination till harvest.  In India, a total of 37 insect pests have been recorded on cole crops (Lal, 1975). The extent of damage due to these pests in India is known from 7 to 90 per cent with consequent reduction in yield from 20 to 80 per cent (Prasad, 1963).

Since cole crops are highly remunerative, intensive plant protection measures involving a number of insecticides are common. In spite of large scale and indiscriminate applications of insecticides, the pests have been found to occur in severe form in all cole crop growing areas.

In recent years, there is a lot of awareness and preference for organically produced foodstuff in the country. Therefore, ecofriendly pest management has gained worldwide attention. This technology is not only effective against crop pests but also safer to beneficial insects and environment (Patel et al., 2003).

Pests of cole crops and their damage symptoms: 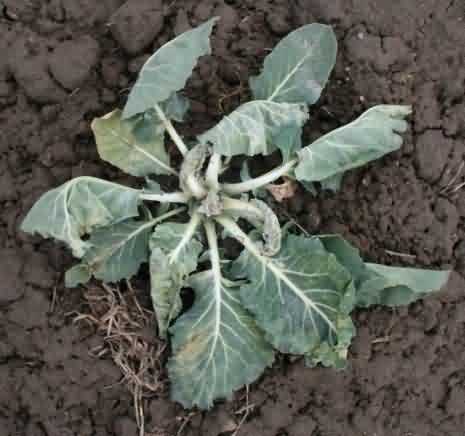 Aphids, also known as plant lice, which are small insects, suck the sap from leaves, stems and apical portion by inserting their stylets into the host plants. Feeding by aphids cause discoloration, distortion and mosaic that result in stunted plant growth (Fig.1). They also secrete honeydew on which black sooty mold develop under high atmospheric relative humidity, which interferes with photosynthetic activity. Due to their quick multiplication rate they could complete one generation in 7-10 days and by giving birth to six to ten young ones per day with 50-100 in total life span. Enormous populations can thus build up in a relatively short period. 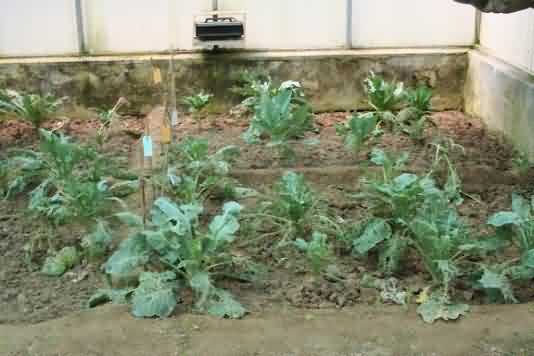 DBM is a cosmopolitan major defoliating caterpillar that hampers the successful cultivation of cole crops. The young caterpillars look green-creamish in colour and scrape the green tissues that turn to white patches in later stage. Whereas, grown up caterpillar makes holes in the leaves and cause defoliation resulting in huge crop loss (Fig. 2).

It is the most serious defoliator of cole crops in nursery as well as in main crop. Adult lays yellowish eggs on the leaves in clusters (Fig. 3a). The young neonates are greenish to velvety, with yellowish lateral stripes and black spots and white hairs. Grown up larvae appear in gregarious form on plants and defoliates it (Fig. 3b). 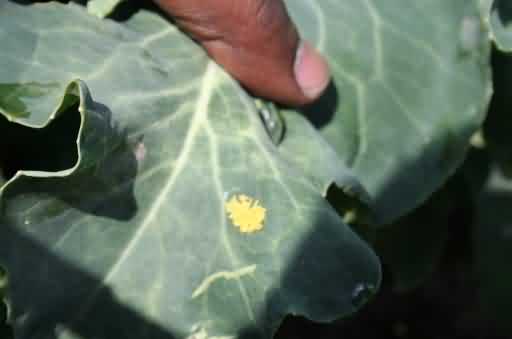 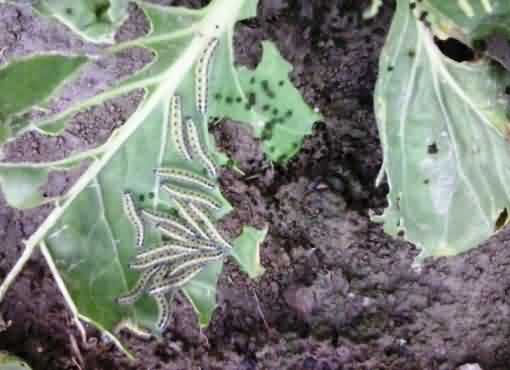 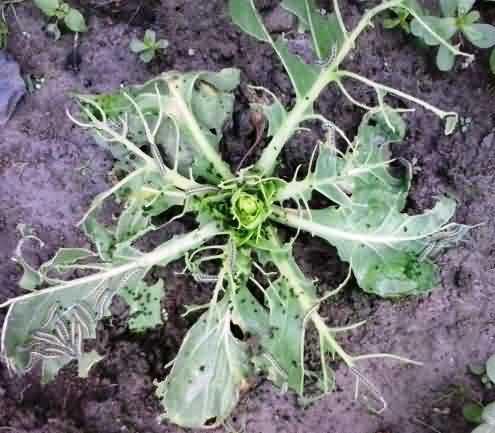 Young caterpillars feed primarily on leaves and cause irregular holes. Whereas, older one feed on the tissue between the veins thereby skeletonising the leaves (leaving only the midribs and veins) or giving them a ragged appearance. Plants thus appeared severely defoliated and stunted, producing no heads/curds.

Larvae, slender green with light wavy lines, appear in cluster at early stage and individually on later stage on plants. Defoliation is the major damage caused by Spodoptera thatresulted in considerable loss to the crops. 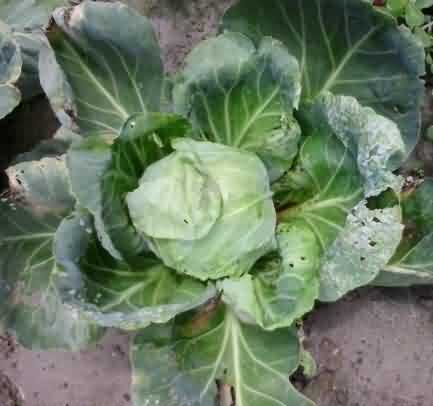 Very serious pest at early stages of the plants as the gregarious larvae attack the tender plants (Fig.4) and at later stage webs the leaf and feed by remaining inside. The apical portion will become stunted and no formation of head/curd.

The borers attack the young developing heads of cabbage and curd of cauliflower. It bores deep inside the growing point/head and feed by remaining within (Fig.5). Faecal pellets of the pest give an indication of its presence. Under severe incidence of the pest, huge crop loss can be expected.

Eco-friendly Management of Insects and pests of Cole crop: