Sunflower (Helianthus annuus) belongs to family Compositae. The root system consists of tap root going up to 3 meter depth with larger lateral spread of feeder roots. It is an annual, erect herbaceous plant. Sunflower is grown in India as an ornamental plant since ancient time. But as an oilseed crop, it was introduced in 1969 only. Commercial cultivation of this in India was started in 1972 in few hectares land in southern states. Because of the certain qualities, sunflower becomes popular even in northern states also.

Sporangiophore is branching at right angle. Pathogen produces oospores which are walled, doubled layered. The pathogen resides in soil as sexually-produced oospores. They are highly resistant to adverse environmental conditions and are capable of remaining dormant in soils for up to 10 years. When soils are saturated and cool, oospores can germinate and form zoosporangia that release motile zoospores that swim through soil water.

Powdery mildew caused by Erysiphe cichoracearum has been considered as economically important disease. It affects most of the commercial varieties under present cultivation and it has been reported from different parts of the world.

During the winter the fungus survives on infected plant parts and in debris such as fallen leaves. It may produce resting structures known as cleistothecia, which resist harsh winter conditions. These will appear as small black dots within the white powdery patches.

The next spring, sexual spores (ascospores) are released from the cleistothecia, shot up into the air, and carried by air currents to leaves of plants where new infections will begin. During the growing season, the fungus produces asexual spores (conidia) that help the fungus to spread and infection to build.

White powdery growth is on the leaves (Plate 1). White to grey mildew appears on the upper surface of older leaves. Symptoms are also seen on stem and petiole.

Conditions that favour the host, also favour the pathogen. Spores germinate optimally at 20-25°C under conditions of high humidity, as quickly as two to four hours after landing on the leaf.

Under optimal conditions, infection will lead to the production of more spores within five to seven days. Spores are primarily dispersed by wind. The disease is more under dry condition to the end of the winter months.

This disease commonly occurs in all varieties and it rapidly spread during the rainy season. This disease has been reported from different parts of the world including India. Alternaria leaf blight is known to cause more than 80 per cent of yield loss under severe epiphytotic conditions.

Disease occurs when spores land on leaves or stems, germinate in the presence of free moisture, and directly penetrate and infect the plant. Plants are most susceptible to infection beginning at flowering and continuing through maturity. Plant stress also predisposes plants to the disease. Spores are readily disseminated in and among fields by splashing irrigation water, wind, and perhaps insects. The pathogen survives between sunflower crops in and on infested crop debris, as a pathogen of safflower and cocklebur, and on seed.

Wet, warm weather promotes Alternaria disease growth. Regions prone to high humidity and warmer temperatures are susceptible to this disease. Fields that are planted early are susceptible to more severe losses from the affects of the disease than those planted later. Disease development is favoured by 25-27o C temperatures with at least 12 hours of wet foliage.

The disease appeared in epiphytotic form in 1997. Disease was reported from all sunflower growing areas of south India. Disease incidence varied from 0.00 to 100 per cent.

The disease transmitted through thrips. Thrips palmi was very well recognized as vector. Thrips recorded on flowers were found to be foraging ones and does not have any role in transmission of the virus disease.

Sunflower rust, caused by the fungus Puccinia helianthi, can cause significant yield and quality losses on susceptible sunflower hybrids under conditions favourable for rust development. P. helianthi has been reported from every state where either cultivated or wild sunflowers are found.

Sunflower rust completes its entire life cycle on sunflower and can only infect sunflower. Puccinia helianthi overwinters throughout the upper Midwest as black telial pustules on infected sunflower debris. Early season rust infection (aecia) may occur on wild, volunteer or hybrid sunflowers. The aeciospores are then wind-blown to other plants to initiate uredial infections. 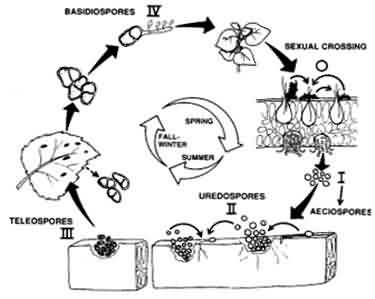 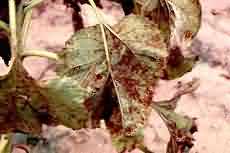