Sericulture is a viable cottage industry catering to the economically small and marginal families and hence this enterprise is well. accepted as an instrument for rural development.

India has the unique distinction of being the only country in the world producing all the four varieties of natural silk viz. mulberry, tasar, eri and muga on a commercial scale. Among them, Antheraea assamensis, (Helfer) bears special significance for production of golden yellow muga silk which is endemic to North East India.

The muga silkworm is a multivoltine and polyphagous insect. Som (Persaea bombycina Kost) and Soalu (Litsea monopetela (Roxb.) Pers are the primary food plants of muga silkworm (Choudhury, 1970). Som leaves improves silk producing ability where as, soalu leaves enhances egg laying capacity of muga silkworm (Thangavelu, et. al. 1986). Som plants grow up to an altitude of about 600 metres while Sualu up to 1000 metres above  sea level.

The nutrition of silkworm entirely depends upon the quality of leaves. The food plants (Leaves) have significant effect on health and survival of silkworms. Better the quality of leaves greater the possibility of obtaining good quality cocoons. Diseases make the leaf unpalatable for the silkworms and cause 6 -42%  reduction in total leaf yield. Therefore knowledge on disease symptoms and its management is very important in muga industry.

Cephaleuros parasiticus Karst. is the causal organism of the disease.

Cephaleuros parasiticus Karst. is the causal organism of the disease

Plucking and burning of infected leaves at the initial stage can minimize the pathogen. 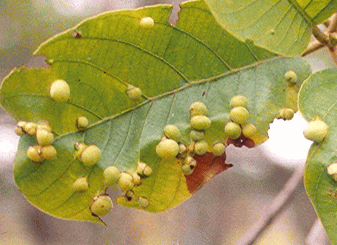 Locally known as ‘Amphutukani’ in Assam. The larvae of the pest voraciously fed leaves of som plant causing drastic loss of foliage.

It is common pest of muga host plant

It causes extensive damage of the leaves of the plants by destroying the epidermis by tunneling in the leaves.