Pigeonpea (Cajanus cajan (L.) Millsp.) is one of the most important legume crops of India. It is known as red gram, arhar and tur in the country. It is an important source of proteins (22%) along with carbohydrates, fibre, certain minerals viz., iron, calcium, magnesium, zinc, iodine, potassium and Phosphorous and ‘B’ complex vitamins.  Pigeonpea stalks are also a major source of firewood and live stock feed. India is the world’s largest producer and consumer of pulses including pigeonpea.

About 90% of the global pigeonpea area is in India contributing to 93% of the global production. It occupies 4.9 m ha area with 3.1 mt production which accounts for a productivity of 1145 kg/ha; ranking ninth in the world.

Traditional varieties of pigeonpea need about 6 to 9 months to mature, while the improved varieties developed can be harvested in 3-4 months. Both long duration (180 days) and medium duration (130-140 days) genotypes are grown in India under various cropping systems.

This pulse crop is grown mostly as an intercrop between cereals crops and plays a unique role in enriching the soil, by adding 40-90 kilogram nitrogen per hectare over a given season.

It has the ability to resist drought and to add large quantities of biomass to the soil in addition to nitrogen fixation makes it a good choice for rainfed as well irrigated production systems.

The deep root system of the crop helps to recycle plant nutrients from deeper layers, and the acid secretions from its roots increase the availability of phosphorus in the soil. Limitation to the increasing productivity of pigeonpea is also due to abiotic and biotic stresses prevalent across the pulse growing regions. 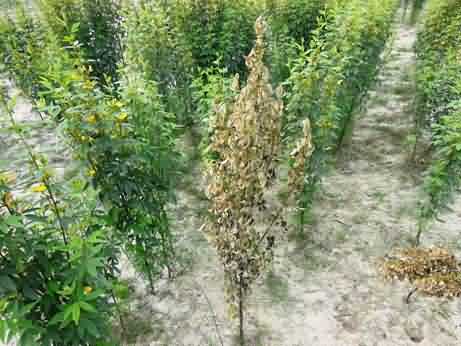 It is the most destructive disease of pigeonpea throughout India caused by fungal pathogen i.e., Fusarium udum Butler. The plant mortality upto 50 per cent has been observed with severe infection of wilt.

The main symptoms are wilting of seedlings and adult plants. The wilting starts gradually showing yellowing and drying of leaves following by wilting of whole infected plant. The affected plants can easily be recognized in patches in the field. Wilt appears on the young seedlings but mainly observed during flowering and podding stage.

Disease symptoms resemble plants suffering from drought even with availability of plenty of soil moisture. Brown or dark purple coloured bands are found on the surface of stem which start from base to several feet above ground level.

The wilt pathogen Fusarium udum is soil borne in nature. The pathogen survives in soil as a saprophyte on dead host roots and other plant part for long time. Under favourable conditions, the spores germinate with a germtube which penetrates the fine rootlets. The fungus may move to larger roots if they got injury.

The affected roots become black and shrivelled. The disease is favoured at a temperature of 17-25 0C. The main infection is through soil only and secondary infection by conidia on above ground parts is rare. The infected plants develop spores which fell down on the soil and functions as inoculum for the next crop.

The causal organism of the disease is Phytophthora drechsleri Tucker f. sp. cajani. Blight causes rapid wilting of plants, desiccation and upward rolling of leaflets followed by withering of petioles and small stems.

The lesions enlarge in size and girdle the stems which break at this point. In advanced stages, the stem is commonly swollen into cankerous structures near the lesions. The seedlings die suddenly due to infection.

In severe cases, the whole foliage becomes blighted. White-pink fungal growth appears on the blighted area under congenial weather conditions. The seedlings are highly prone to this infection and dry plants are common during rainy season. The disease is serious when continuous rains occur or there is water logging in the field. Such conditions can create epidemic of the disease, however plants are not affected after 60 days of growth.

The pathogen survives in soil and on infected plant debris. Cloudy weather and drizzling rain with temperature of 25 0C favour infection. Low lying area where water stagnates and close spacing encourage blight build up. Warm and humid weathers after infection result in rapid development of disease.

Powdery mildew of pigeonpea is caused by Leveillula taurica which is common in some part of India. Disease often found on leaves, flower buds under favourable environmental conditions. White powdery patches are found on both surfaces causing premature defoliation. Severe infection cause yellowing of leaves with crinkling. The fungus is airborne, spreading from one field of pigeonpea to another in the vicinity. 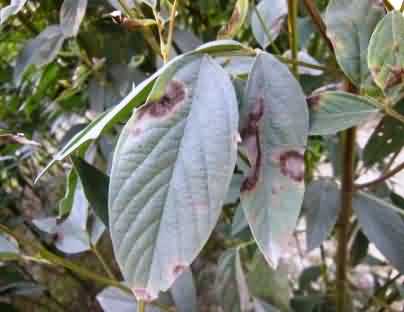 This disease is caused by fungus Alternaria alternata. It appears in the form of light to dark prominent brown small necrotic spots on the leaves and pods.

Severe infections cause defoliation and destruction of crop. Disease is mostly confined to older leaves but may infect new leaves in post rainy season. 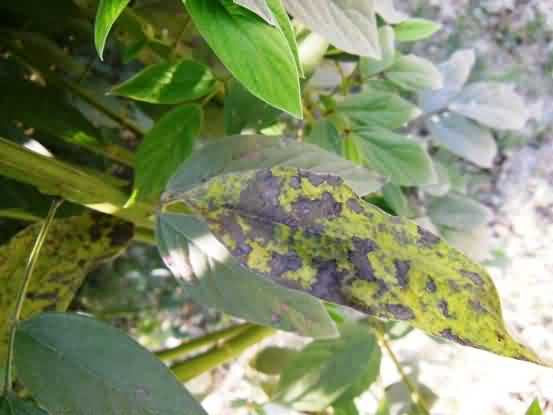 This leaf spot disease is caused by fungus Cercospora indica. It is present in parts of Uttar Pradesh, Bihar and several places of South India.The symptom first appears as minute circular to irregular brown necrotic spots, one to two mm in diameter, mainly on lower surface of older leaves. Several lesions coalesce causing leaf blight and premature defoliation. Sometime, lesions appear on petiole, young branches and cause their tips to dry and die back. Fluffy mycelial growth or concentric zonations on lesions are also seen. 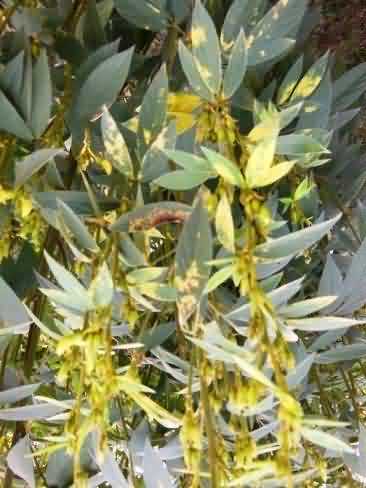 Plants present pale green and bushy appearance without flowers and pods. Sterility of plants can be partial or full. Partially sterile plants produce discoloured and shrivelled seeds. The plants infected with sterility mosaic remain stunted. The leaves show mosaic symptoms and the symptoms may develop on all the leaves of infected plants.

The flowering is partially or completely stopped and a few flowers which develop are sterile. Infection by the pathogen in plants when they are less than 45 days old results in 95-100 % losses, while older plants suffer 26-97 % losses.

The sterility mosaic thrives readily in crops under irrigation or near irrigated fields. Such crops remain at risk of early infection. The disease is transmitted by the eriophid mite Aceria cajani.

Pigeonpea is the second most important and highly profitable pulse crop cultivated in different states in the country under wide variety of agroclimatic conditions and varied cropping systems of different maturity and, hence it is valuables to many pests.

A variety of insect pests infest pulses and the annual yield loss is estimated to be 20 per cent in pigeonpea. About 250 species of insects belonging to 8 orders and 61 families are reported to attack this crop. The early or vegetative stage pests are not causing economic damage. However, the pests of flowers and pod borers are the major and important pests and causing economic damage. 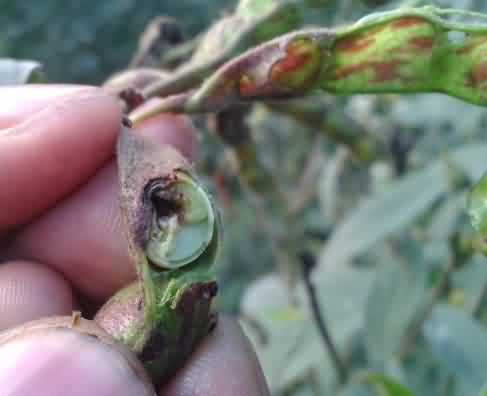 It is most damaging insect of pigeonpea. A single female lay up to 2000 small white eggs usually singly eggs are laid on flower buds and young pods. Larval colour is varied- yellow, green, pink, orange, brown, or black with dark and light stripes on either side of body.

Full-grown larvae are 30 to 40 mm long and may have various body color and banding patterns. Young larvae are small and found feeding on tender leaflets. Grown up larvae feed on developing seeds by making an entry hole on pods that is cut with clear round margins.

Half portion of larval body remains outside the pod while feeding is also an important. Pupation occurs in the soil or in plant debris.  It is the single most important constraint to pulses.

High level of insecticide resistance, make this species one of the most difficult pest to manage. Adult H. armigera have a wing span of about 40 mm with dull brown forewings. The Helicoverpa spp. destroys buds, flowers and pods.

If flowers and pods are not available, larvae will feed upon foliage. There is no resistant variety for pod borers. Planting date is having influence on the incidence of pod borers. 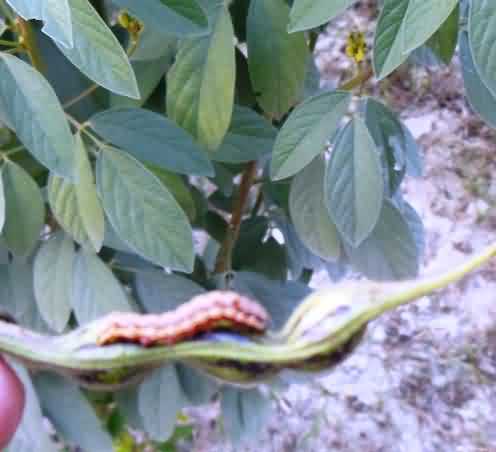 It is an important insect of foliage and pods of pigeonpea. Eggs are laid in small clusters of 10 to 15 on leaves, buds, and flowers. A full-grown larva measures 15 mm in length, with a pale body lined by rows of conspicuous black spots on its dorsal surface. Adults have distinctive white bands on forewings with a wing span of 20 mm.

M. vitrata becomes a menace in early-season pigeonpea especially in areas. Webbing of tender leaves and flower buds together seen on plants indicate the possibility of Maruca damage.

Upon opening of the webs, dull to yellow-white colour larva with dark spots forming distinct series along the length of the body are seen. Larvae feed from inside a webbed mass of leaves, buds, and pods. This behavior makes Maruca a foliage feeder and pod borer.

It has a narrow host range and only feeds on pigeonpea and closely related species. The small, black fly is about 5 mm in length. Eggs are laid in the wall of an immature pod.

The white maggots feed on the developing seed and reach a length of 3 mm before pupating. External symptoms on pods are not highly obvious. Small holes with whitish window are common when a mature maggot about to pupate is seen inside the pod.

Pod fly damage is also inferred through dissection of pods. Maggots feeding on seeds and puparia are seen in pods infested with pod fly. More than one maggot or pupa could be seen inside a single pod. The tunnelling type of feeding found on a seed is indicative of pod fly damage.

Immature stages (maggots and pupae) may or may not be seen. The exit holes are seen on the pod wall.

Pod fly infested pods do not show external evidence of damage until the fully-grown larvae chew holes in the pod walls. This hole provides an emergence "window" through which the adults exit the pod. Pod fly damaged seeds will not germinate and are unfit for human consumption.

It is common in pigeonpea and is a major pest in several areas of India. Adult plume moths measure 10mm in length, and have fringed wings that are held perpendicular to the body at rest.

Eggs are laid singly on buds and pods. The full-grown larva is about 15mm long, green, and has a spindle-shaped body covered with short spines. Plume moth caterpillars are more rampant during the post rainy season than during the rainy season. Larvae feed on buds, flowers and pods, resulting in reduced yields.

Blister beetles are widespread in pigeonpea in Asia. Mylabris pustulata adults measure about 25 mm in length and have red and black alternating bands on the elytra. Other species may vary in size but all are brightly colored.

Eggs are usually laid in the soil and the diet of the larvae consists of other soil insects, including major pests. Adult beetles feed on flowers and tender pods, and may have a significant impact on yields, especially of short-duration genotypes.

Adults are black in colour with large yellow spots and a red band across the abdomen. Number of spots varies with species. Adult beetles feed on flowers and tender pods, and may have a significant impact on yields, especially of short-duration genotypes.

1E mail: This email address is being protected from spambots. You need JavaScript enabled to view it.