Eggplant crops are affected by a variety of harmful diseases. If it is not controlled in time, then its market price declines and farmer may face excessive monetary loss. Therefore, the major diseases of brinjal should be identified and timely treatment is necessary.

The disease causes severe damage in the nursery. High soil, moisture and moderate temperature along with high humidity especially in the rainy season leads to the development of the disease. Two types of symptoms are observed:

Post-emergence damping-off: The post-emergence damping off phase is characterized by infection of the young, juvenile tissues of the collar at the ground level. The infected tissues become soft and become water soaked. The collar portion rots and ultimately the seedlings collapse and die.

Healthy seed should be selected for sowing. The seed should be treated with Thiram @ 2g/kg of seed before sowing. Continuous raising of nursery in the same plot should be avoided.

Soil solarization by spreading 250 gauge polythene sheet over the bed for 30 days before sowing and application of bio-control agent Trichoderma viride in soil @ 1.2kg/ha is also found effective to control damping-off to considerable extent.

It is a serious disease of brinjal infecting the foliage and the fruits. The fungus infects the seedlings in the nursery causing damping off symptoms. In seedling infection, it causes damping off symptoms. When the leaves are infected small circular spots appear which become grey to brown with irregular blackish margins

Lesions may also develop on petiole and stem, causing blighting of affected portion of the plant. Symptoms on the infected fruits appear as minute, sunken dull and dusky spots which later merge to form rotten areas. The flesh of severely infected fruits rots.

Adopting good field sanitation, destruction of infected plant material and crop rotation help to reduce the spread of the disease. Seeds obtained from disease plants should be used for planting.

Seed treatment with Thiram (2 g/kg seed) protects the seedling in the nursery stage. Spraying with Dithane Z-78 (0.2%) or Bordeaux mixture (1%) effectively controls the disease in the field.

Removal and destruction of affected plant parts and spraying the affected plants with Bavistin (0.1%) or Chlorothalonil (2 g/litre of water) is useful for disease control.

The disease causes characteristic leaf spots with concentric rings. The spots are mostly irregular and coalesce to cover large areas of the leaf blade. Severely affected leaves drop off. The symptoms on the affected fruits are in the form of large deep-seated spots. The infected fruits turn yellow and drop off prematurely.

Removal and destruction of affected plant parts and spraying the affected plants with Bavistin (0.1%) is useful for disease control. 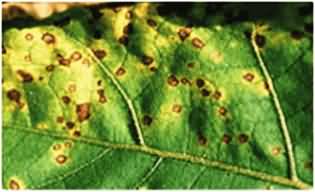 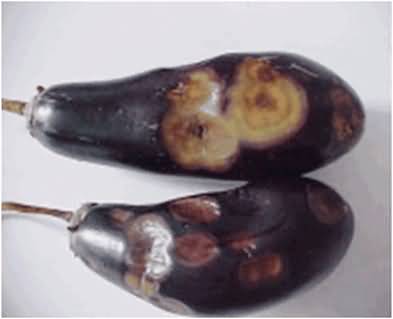 High humidity favours the development of the disease. The symptoms first appear as small watersoaked lesions on the fruit, which later enlarges in size considerably. Skin of infected fruit turns brown and develops white cottony growth.

Removal and destruction of the affected fruits and spraying the crop with Difolatan (0.3%) thrice at an interval of 10 days effectively controls the disease.

The disease attacks the young plants as well as mature plants. The infected young plants show dwarfing and stunting due to the shortening of the internodes. Such plants do not flower and fruit. Infection after the flowering stage results in development of distorted floral buds and fruits.

The affected fruits finally drop off. The infected leaves show the presence of irregularly scattered necrotic pale yellow spots over the leaf lamina. Later on, these spots coalesce resulting in complete wilting of the leaves.

The roots of the affected plants are split open longitudinally, a characteristic dark brown discoloration if the xylem vessels is observed.

Crop rotation with bhendi, tomato, potato should be avoided. Soil application and foliar application with Benlate (0.1%) is effective in reducing the wilt disease.

Removal and destruction of the affected plant parts and using disease resistant varieties help to reduce the disease incidence. Crop rotation with bhendi, tomato, potato should be avoided. Before sowing the seeds should be dipped in a solution of Streptocycline (1 g/ 40 litres of water) for 30 minutes.

This is a serious viral disease of brinjal. The disease is transmitted by leaf hopper (Cestius(Hishimonus) phycitis and Amrasca biguttula biguttula). The leaves of the infected plants in the early stages are light yellow in colour.

The leaves show a reduction in size and are malformed. Disease affected plant are generally shorter in stature bearing a large number of branches, roots and leaves than healthy plants.

The petioles get shorter considerably, many buds appear in the axil of leaves and internodes get shortened thus giving the plants a bushy appearance.

Flower parts are deformed leading the plants to be sterile. Infected plants do not bear any fruit. However, if any fruit is formed it becomes hard and tough and fails to mature.

Adopting sanitary measures including the eradication of susceptible volunteer crop plants from a previous planting can reduce the damage.

Use of barriers of trap crops and early removal and destruction of infected plants is also recommended.

The sowing time can be adjusted to avoid the main flights of the beet leafhopper. Spraying Malathion (2ml/litre of water) starting with the appearance of the leaf hoppers controls their population.

This is a viral disease caused by Potato Virus Y and transmitted by aphids (Aphis gossypi and Myzus persicae). The important symptoms of the disease are mosaic mottling of the leaves and stunting of plants. The leaves of infected plants are deformed, small and leathery. Plants show a stunted growth when infected in the early stages.

The disease incidence can be minimised by reducing the population of aphids, removal and destruction of infected plants and eradication of susceptible weed hosts.

In the nursery, aphids can be controlled by application of Carbofuran (1 kg a.i./ha) in the nursery bed at the time of sowing seeds followed by 2-3 foliar sprays of Phosphamidon (0.05%) at an interval of 10 days.

Spraying Phosphamidon (0.05%) at 10 days interval starting from 15-20 days after transplanting effectively controls the aphids in the field. 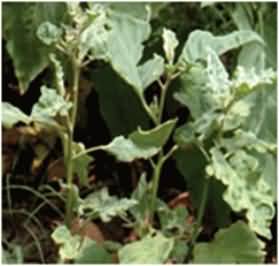 Email ID – This email address is being protected from spambots. You need JavaScript enabled to view it.