The scarcity of clean water resources around the globe has generated a need for their optimum utilization.Internet of Things (IoT) solutions, based on the application specific sensors’ data acquisition and intelligentprocessing, are bridging the gaps between the cyber and physical worlds. IoT based smart irrigation managementsystems can help in achieving optimum water-resource utilization in the precision farming.

Why should we go for irrigation scheduling smartly?

Water scarcity is already affecting a part of the world and the situation is getting worse over time due to the increasing world population and fresh water demands. The current world population is around 7.2 billion and it is expected to be more than 9 billion by 2050. The agriculture sector, particularly irrigation, consumes a major portion of the freshwater.

Due to lack of cost-effective intelligent irrigation systems, developing countries are consuming more water in contrast to the developed countries for achieving the same yield. For example, India has approximately 4% of world’s freshwater resources to serve 17% of the world population; however, it takes 2–4 times more water for some of its major agri-produce in comparison to the other countries like China, USA.

Therefore, there is a dire need to come up with advanced technologies based on smart strategies and systems for effective utilization of fresh water. Figure 1 shows the comparative efficiency of various irrigation techniques practiced in farmland. 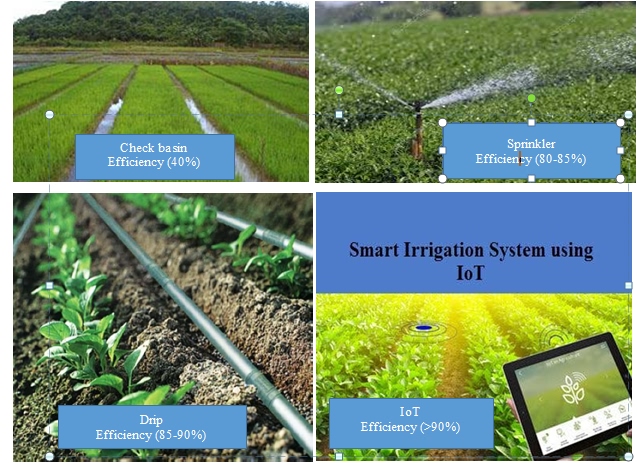 The term “IoT” stands for the internet of things, can be defined as the interconnection between the individually identifiable embedded computing apparatus in the accessible internet infrastructure. The ‘IoT’ connects various devices or equipment  and transportations with an help of internet as well as electronic sensors.

These components are grouped into three different layers, i.e. Data collection and transmission layer, Data processing & intelligence layer and application layer of IoT. The components are discussed one by one. 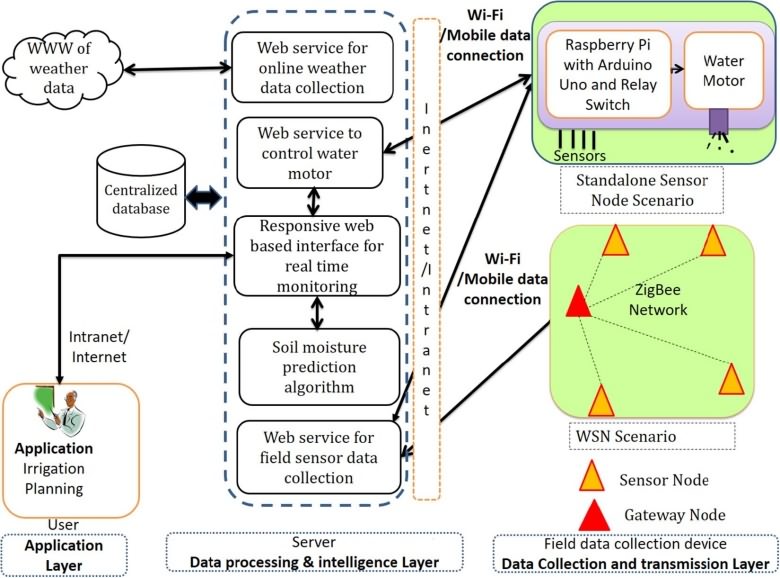 Depending on the field requirements, a standalone sensor node or awireless sensor network of the sensor nodes may be deployed. Instandalone scenario field data collection device consists of four sensors,viz., Soil Moisture sensor, Soil temperature sensor, temperature and humidity sensor, and Ultraviolet (UV) Light Radiationsensor. The output ofthese sensors is read by an Arduino-Uno, which is connected toRaspberry Pi (R-Pi) for fetching and storing the data from sensors.

A web service is developed to collect the weatherforecasting data. This web service also aggregates the weather forecastingdata like temperature, humidity, cloudiness, UV Index andprecipitation of different web forecasting portals. The developed web service read theforecasted data of the field location andstore in the server, which is considered in the soil moistureprediction algorithm.

An algorithm is developed to predict the soil moisture based on field sensors data and weather forecasting data using algorithms like support vector regression model and k-means clustering algorithm etc.

The algorithm shows information regarding soil moisture of the upcomingdays. It also provides irrigation suggestions, based on the defined levelof soil moisture and predicted precipitation, to save water and energy.

A responsive web based user interface is developed to visualize real-timesensors data, predicted soil moisture of upcoming days, and precipitationinformation. Further, it also provides a facility for irrigationscheduling. The user can schedule the irrigation at a specified thresholdvalue of soil moisture.

The IoT based smart irrigation system avoids over use of water in irrigation, under irrigation and reduces the wastage of water and it can be implemented in large agricultural areas. The system can be a solution to labor shortage problem in agricultural. Irrigation in crops fields can be operated automatically as well as manually using this system.

Agriculture is the largest consumer of fresh water. At present scenario, due to increasing population, land and water resources are under enormous pressure which emphasis on sustainable use of natural resources. Hence, there is a need of inculcation of advanced technology like IoT based smart irrigation system. It provides a smart solution to full fill the more crop per drop motto of PMKSY.

This system uses information from soil moisture sensors to irrigate soil which helps to prevent over irrigation or under irrigation of soil as a result prevent crop damage. The farm owner can also monitor the process online through a website. IoT based smart irrigation system in the field of agriculture plays important role for enhancing water productivity as well as in reducing the extra man power efforts, fertilizer and water requirement.

Thus, this system is a potential solution to the problems faced in the existing manual and cumbersome process of irrigation by enabling efficient utilization of water resources and also minimized human intervention in farming activities.

Therefore, it provides the smart solution of water crisis as well as provide the automated system through which one farmer can control the large farm area located at different location by using their mobile from remote place and fulfill the requirement of “doubling the farmers’ incomes”.