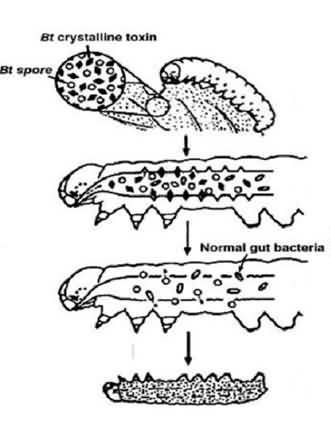 B. thuringiensis and Cry protein toxins are efficient, safe and sustainable alternatives to chemical pesticides for the control of insect pests.

The toxicity of the Cry proteins have traditionally been explained by the formation of trans membrane pores or ion channels that lead to osmotic cell lysis. The protein targetsthe major pests of cotton, tobacco, tomato, potato, corn, maize and rice.Mode of action of the crystal toxin on susceptible larvae involves

A rapid test, suitable for on-farm use, for the detection of cry protein provides a tool for farmers to monitor and identify best practice.

Lateral flow test serves for quick, easy, inexpensive to detect protein. World agriculture must continue to fulfill the food and fibre needs of the growing human population as well as rectify the existing widespread malnutrition.

To achieve this aim, pest control will have to rely on integrated pest management practices which depends on biological control.

The first stage can be accomplished by qualitative methods (presence or absence of trans-gene), whereas the third stage uses semi quantitative (above or below a threshold level) methods.

Currently, the most important approaches in immunological assay using antibodies that bind to the novel proteins unique to the GM crop known asLateral Flow method.

GMO detection by  strip test (also called a lateral flow device or dipstick).  Lateral flow strips, also known as immuno strips, are designed to quickly determine the presence or absence of genetically modified traits expressed in transgenic corn, cotton, and soybeans.  They are relatively inexpensive and simple to use.

Strip tests are thin strips comprised of a nitrocellulose membrane covered by a sample pad on one end and a wicking pad on the other end. The sample pad is submersed in a solution of homogenized test sample.

The solution wicks up the nitrocellulose membrane on the strip, causing the fluid to pass over an area containing an excess of gold-labeled antibody specific to the GMO protein being tested. 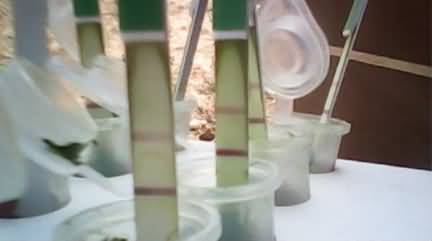 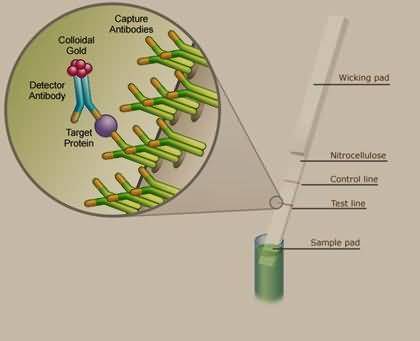 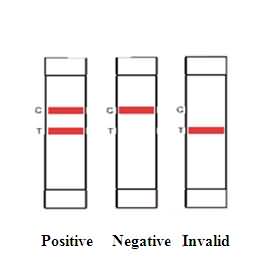 The lateral flow immuno assay is economical, more amenable for sale application, and suitable as an initial screeningof GM crops.

Thestrips developed commercially to detect endotoxins expressed by Bacillus thuringiensisto protect against insects. Commercially available lateral flow strips are currently for GM products, can be used to detect multiple proteins are being developed.