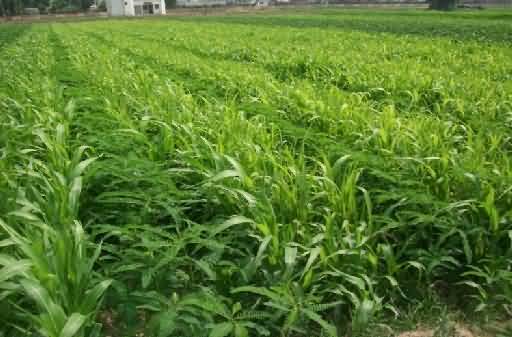 Every farmer knows how much work goes into the production of a basket of compost and carrying it to the fields. But it never seems that the farm production gives an equal return for the hard work that goes into making and carrying the compost.

Green manures are a method of replacing that basket of compost with a handful of seed. In this method, the plants that grow from the handful of seed are ploughed back into the soil. After a while in the soil, the plants rot down to become compost.

Plants used in this way are called Green Manures. It's a very good way of increasing the fertility of the soil, and can give huge benefits for farmers.

Green manure crops are primarily used in environmentally friendly agricultural practices to reduce the application of chemical fertilizer and herbicide.

HOW TO GROW GREEN MANURE CROPS

There are basically two ways in which green manures can be used:-
1. When land is unused, or fallow between crops;
2. While crops are still growing in the fields.

When crop land is empty after crops have been harvested, green manure seeds can be sown as thickly as sowing wheat. When the green manure plants are about to flower they can be cut and left, or ploughed into the soil.

This method is mostly used in maize growing areas. An easy method is to sow a green manure at the same time as maize, and then dig it in when it is time to weed the maize (after 3-4 weeks). At this time green manure seeds can also be sown, and the green manure is cut and mulched or ploughed in after the maize is harvested to provide even more fertility.
Green manures are easy to use, but it's important to note certain things, such as:-
1. Green manures can be used in all seasons.
2. Which-ever type of green manure is being used; they will give most favourable results if cut and/or ploughed in at flowering time, before seed is set.
3. Climbing types of green manures can smother the crops they are grown with. If so, the climbing stems need pulling down from the crops.

Selecting which green manures to use: -

Criteria for selection of green manures include :-

It is a vigorous growing green manure crop, which can be incorporated at 10 weeks after sowing. It does not withstand water logging. The seed rate is 25-35 kg/ha. The green matter yield is 15-20 t/ha. Quantity of nitrogen fixed by the crop is 75-80 kg/ha.

It is a quick growing succulent green manure crop, which can be incorporated at about 8 to 10 weeks after sowing. This crop adapts to varying conditions of soil and climate. It can be grown even under adverse conditions of drought, water logging, salinity etc. Recommended seed rate is 20 to 25 kg per ha. The green matter yield is 10-20 tonnes per ha. Quantity of nitrogen fixed is 75 to 80 kg per ha.

It is a green manure crop, which has nodules both on the stem and root. It thrives well under waterlogged condition. The normal seed rate is 30 to 40 kg per ha. To get early, uniform germination and vigorous seedlings, seeds have to be scarified with concentrated sulphuric acid for 15 minutes and then washed thoroughly with fresh water and sown immediately. A green matter yield of 15 to 20 t/ha equivalent to 150-180 kg N/ha is obtained within a period of 8 to 10 weeks.

It is a slow growing green manure crop. It is not grazed by cattle and is suitable for light soils. It resists drought but does not withstand water stagnation. The seed have a waxy, impermeable hard seed coat and do not quickly germinate.

To hasten germination, the seeds are to be abraded with sand or steeped in hot water at 55øC for two to three minutes. The seed rate is 20-25 kg/ha and the green matter yield varies from 8 to 10 t/ha.

When kolingi is sown in an area for two or three seasons continuously, scattered seeds will give rise to volunteer plants and there is no need for further sowing.

Indigo resembles kolingi, but has a more leafy habit. It shows resistance to drought.

Better yield is obtained when two irrigations are given and when grown in clayey soil. Seed rate is 20 kg/ha. Green matter production is 8-10 t/ha.

It is a shrub, which takes up a tree habit under favourable conditions of soil and climate. For green leaf purposes, the shrub should be kept low by pruning or lopping at a height of 2-3 m. The shrub can be pruned two or three times a year and it withstands repeated lopping.

With in two years after planting, the plants are ready for lopping. Each plant gives five to ten kg of green leaves annually.

This species, a native of Central America, occurs as a branched shrub. It is a promising forage tree crop, the leaves of which contain about 3-4% of N. Leucaena fixes about 500-600 kg N /ha per year.

Propagated by seeds. During flowering tree is topped (stem and branches cut) and loppings used for green leaf manuring.

Sesbania is a legume commonly used as a green manure crop to add nitrogen and organic matter to thesoil. The most common species of sesbania used in Asia are Sesbania cannabina (former name acculeata), S. rostrata and S. cannabina (which produces nitrogen-fixing nodules in its roots).

Sesbania rostrata (produces nitrogen-fixing nodules in both roots and stems) and is commonly found in Africa.

Why use Sesbania in rice?
The organic matter and nitrogen produced by Sesbania help improve the soil and subsequent crop growth. Under some circumstances, growing green manures is a cheaper and renewable source of N, especially when inadequate infrastructure and transport mean that other sources of nutrients (e.g., fertilizer) are expensive or not delivered on time.

When to plant:
Sesbania is planted before or after rice, when the land is vacant. Sesbania is highly photoperiod sensitive, flowering in about 35 days during the long-day season and in 125 days during short-day season.

Seed rate:
Where weed populations are low, sesbania seeds can be broadcast at a rate of 30 kg per ha before the onset of the rains. With land preparation and irrigation, the seeding rate can be reduced to 16 kg per ha.

Seed usually weighs from14 to 18 g per 1000 seed. To improve germination (up to 65 %) and emergence, seeds can be immersed in water at 100oC for three seconds. Some farmers scarify the seeds (i.e., slightly split the seed coat) by simply pounding the sacks containing the seed.

Irrigation:
The crop does not need to have standing water, but irrigation water should be applied as necessary (e.g., if soil is cracking and sesbania leaves are being shed).

Incorporation:
After about 45-60 days, and before it becomes woody, incorporate the Sesbania in one of several ways: e.g., chop the crop for easier ploughing. A faster, and more efficient way is tok- nock over the standing crop of sesbania using for example an animal-drawn wooden plank, and then plough along the direction of the lodged crop.

A hydro tiller used for tillage in deep mud, incorporates bulky biomass effectively. The high-speed cage wheel, with short triangular teeth, cuts the biomass into pieces before burying it into the puddled soil. If using the hydro tiller, the field should be water soaked for at least 48 h before the biomass is incorporated.

For large-scale production, a four-wheel tractor fitted with a roto tiller is the most efficient method.

Seed production:
Sesbania seeds can be produced by growing when the day lengths are shorter than 11hrs. During these periods, Sesbania flowers in 30 to 35 days and bears seed 30 days later. Seeds

harvested during the rainy season are often of lower quality as they are often infested with pod borers. Seeds can also be produced on marginal lands, dikes or paddy bunds to reduce costs.

Limitations
Constraints of Sesbania as a green manure include:

1. Low seed production.
2. Increased labour-requirements (e.g., for ploughing and incorporation of bulky biomass into the soil).
3. Sesbania's sensitivity to photoperiod.
4. Insect problems.
5. Competition with cash crops for land and water.

In this way dhaincha (Sesbania aculeata) is a most suitable crop for green manuring in rice field before transplanting. It gives good results as research shows that 25% of the nitrogen need of the crop could be fulfilled by it.