Vermicomposting is a modified and specialised method of composting - the process uses earthworms to eat and digest farm wastes and turn out high quality compost in two months or less. Vermicompost is not a biofertiliser as is touted by some, merely improved compost.

Vermicompost can also be used to make compost tea. Vermicompost tea is useful as a prophylactic against pests and diseases, for pest repelling and as a foliar spray. A by-product of vermicomposting called vermiwash (which can be collected if there is a tap at the base of the vermicompost tank) also serves the same purpose.
An important point to note in case of vermicomposting but widely ignored, is to carry out proper sieving of the compost before applying it in the fields. The most efficient and widely-used earthworms in vermicomposting are not indigenous and if the worms and casts find their way to the fields, they will quickly colonise and dominate the local species. Farmers can also use indigenous earthworm species, collecting them from their fields using collection baits and introducing the earthworms into heaps. In the usual way vermicomposting is practiced in India and most other places around the world, it is both labour-intensive and requires some infrastructure. As a result, while a small farm can use this method to compost most of its wastes, a larger farm often finds it expensive and difficult to compost most of its wastes through vermicomposting. We have after some experimentation developed a methodology through which these issues are resolved - labour, time, managerial inputs, infrastructure and the usage of exotic worms. We offer training and consultancy services on composting and vermicomposting, including enrichment techniques, low-cost methods and improved methodologies. To know more, please read the sections on consultancy and training, specialised areas of consultancy and training and production of organic inputs.

The most widely used vermicomposting system, worldwide, is the 'bed' method, which involves applying thin layers of sanitised and partially matured compost, to the surface of beds containing high densities of earthworms. New layers of waste are applied to beds on a regular basis and the earthworms move upwards into the fresh waste to feed and to process the material. Earthworm numbers increase as more waste is applied until a limiting density is reached. The earthworms are then harvested or the beds are divided. Harvesting earthworms by hand can be a very time consuming business and although in principle trammel screens would be suitable, these are seldom used. The top 100 mm to 150 mm of the compost bed soil is removed regularly and is the worm compost sold. 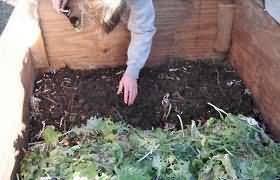 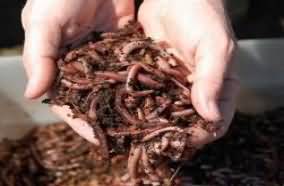 How long does it take to make mature vermicompost?

It is difficult to compare directly composting with vermicomposting in terms of the time taken to produce stable and mature composted products. With vermicomposting, particles of waste spend only a few hours inside the earthworm's gut and most of the decomposition is actually carried out by micro-organisms, either before or after passing through the earthworm. Hence, earthworms accelerate waste decomposition rather than being the direct agent. With windrow composting, it usually takes at least six to twelve weeks to produce stable compost, and research suggests that vermicomposting takes about the same length of time. However, processing rates will depend on many factors such as the system being used, the nature of the wastes and the ratio of earthworms to waste.