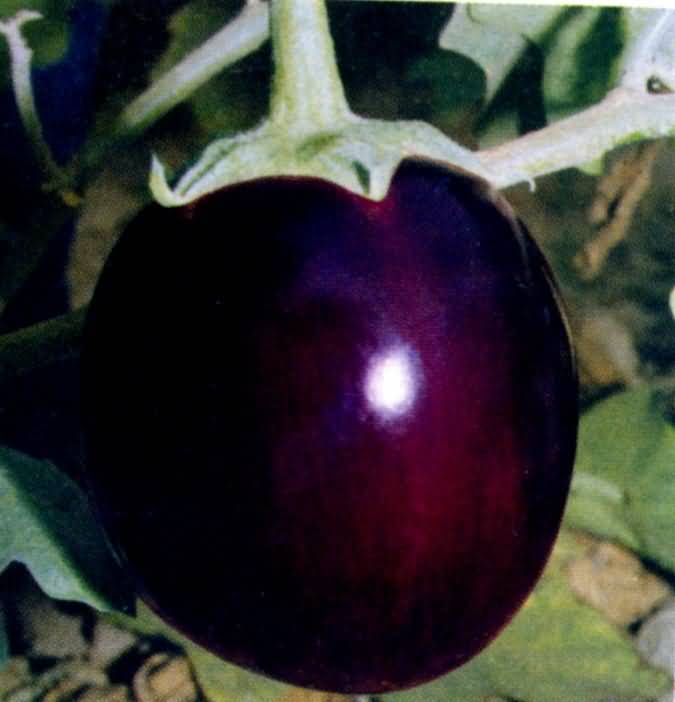 Brinjal or eggplant (Solanum melongena L.) is an important solanaceous crop grown in India.   In India, it is one of the most common, popular and principal vegetable crops grown throughout the country except higher altitudes. It is a versatile crop adapted to different agro-climatic regions. Brinjal can be grown throughout the year. It is a perennial but grown commercially as an annual crop. The varieties of Brinjal display a wide range of fruit shapes and colours, ranging from oval or egg-shaped to long club-shaped; and from white, yellow, green through degrees of purple pigmentation to almost black.

Brinjal seeds are sown on nursery beds to raise seedlings for transplanting in the field. Raised beds are necessary to avoid problem of water logging in heavy soils. In sandy soils, however, sowing can be taken up in flat beds. Raised beds of size 7.2 x 1.2 m and 10-15 cm in height are prepared. Thus, ten such beds are sufficient to raise seedlings for planting one hectare area. About 70cm distance is kept between two beds to carry out operations of watering, weeding, etc. The surface of beds should be smooth and well levelled. Well-decomposed FYM or leaf mould may be mixed with the soil at the time of bed preparation. To avoid mortality of seedlings due to damping off, drenching of the beds with Bavistin (15-20 g/10 litres of water) is effective.

About 250-300 g of seed are sufficient for raising seedlings for one hectare of land. Prior to sowing seeds are treated with fungal culture of Trichoderma viride (4 g/ kg of seed) or Thiram (2g/ kg of seed) to avoid damage from damping-off disease. Sowing should be done thinly in lines spaced at 5-7 cm distance. Seeds are sown at a depth of 2-3 cm and covered with a fine layer of soil followed by light watering by water can. The beds should then be covered with dry straw or grass or sugarcane leaves to maintain required temperature and moisture. The watering should be done by water can as per the need till germination is completed. The cover of dry straw or grass is removed immediately after germination is complete. During the last week in nursery, the seedlings may be hardened by slightly withholding water. The seedlings are ready for transplanting within 4-6 weeks of planting when they attain a height of 15 cm with 2-3 true leaves. The sowing and transplanting time in different seasons are as follows-

The field should be kept weed-free, especially in the initial stage of plant growth, as weeds compete with the crop and reduce the yield drastically. Frequent shallow cultivation should be done at regular interval so as to keep the field free from weeds and to facilitate soil aeration and proper root development. Deep cultivation is injurious because of the damage of roots and exposure of moist soil to the surface. Two-three hoeing and the earthing up are required to keep the crop free of weeds. Hand weeding and hoeing are done to control weeds. Black plastic mulch is also an effective method to control weeds. Black polythene mulch prevents entry of light, which restricts germination of weed seeds and growth.Preemergence application of Fluchloralin (1.5 kg a.i./ha) coupled with one hand weeding 30 days aftertransplanting is effective for control of weeds.staking is another cultural practice which help to keep branches upright and protect from wind damage. If suport is not provide then heavily bearing branches may break.

Brinjal being a long duration crop, requires a good amount of manures and fertilizers for high yield. The fertilizer dose depends upon the fertility of soil and amount of organic manure applied to the crop. For a good yield, 15-20 tonnes of well-decomposed FYM is incorporated into the soil. Generally, application of 150 kg N, 100 kg P O and 50 kg K O is recommended for optimum yield. Half dose of N and full dose of P and K is given at the time of planting. The balance half of N is given in 3 equal split doses. The first split dose is given one and half month after transplanting, the second dose one month after the first application and the final at three and half months after transplanting. For hybrid varieties, the recommended dose is 200 kg N, 100 kg P O and 100 Kg K O. Out of this dose, 25 % of N and 100 % of P & K is applied as basal dose. Remaining 75 % of P is applied in three equal split doses. The first split dose of N is applies 20 days after transplanting. The second dose is given just before the onset of flowering while the third after the first picking/harvesting.

In esatern India Application of 25 t/ha FYM along with 60 kg/ha each of P2O5 and K2O has been recommended. Nitrogen is applied @ 100 kg/ha in 5 to 6 split doses during the crop growing season through fertigation.