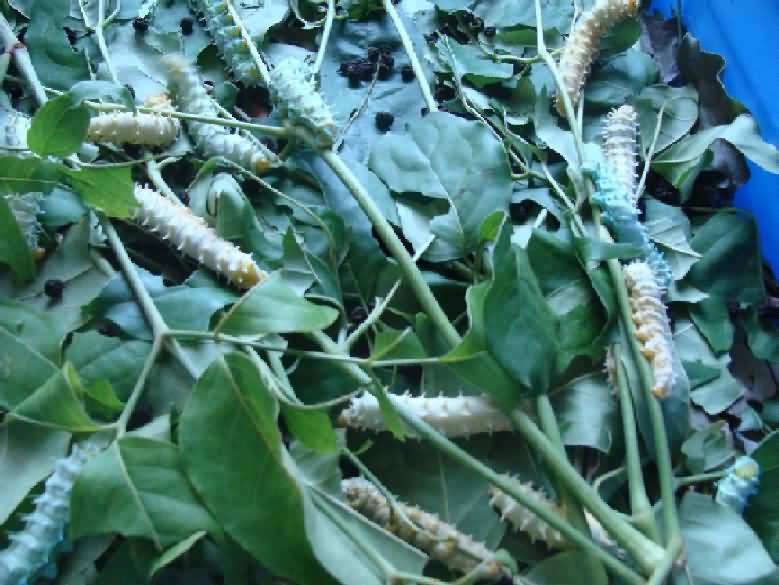 Eri silkworm feeds primarily on castor leaves, but sufficient castor leaves are not available throughout the years for commercial rearing. Therefore, Kesseru (Heteropanax fragrans Seem) is used as an alternative food plant during the scarcity of castor leaves. Depending upon food preference and rearing performance of both wild and cultivated silk worms, Kesseru ranks next to castor.

Kesseru (Heteropanax fragrans) belongs to the family Araliaceae and it is soft wooded perennial tree grown in plain as well as hilly tracts of northeastern India. Since, it is a perennial plant, the cost of cultivation and leaf yield potentiality is better than Castor. The productive life of Kesseru is more than 25 years and annual leaf yield per hectare is found almost 20-25 MT from a properly maintained farm. Moreover, Kesseru plant is less susceptible to disease and pests in comparison to Castor. Kesseru feed silkworm produce small cocoons but they are compact with strong fiber. Therefore, systematic Kesseru plantation is recommended and popularized among the farmers for large scale commercial eri silkworm rearing.

Kesseru is commonly propagated from seedlings by collecting seeds from wild grown or cultivated plantation. However, it is desirable to grow seedlings after collection of seeds from full grown and healthy plants. The seeds loss their viability soon after maturity and delayed in the seed sowing results poor germination. Kesseru seeds are initially sown in nursery beds or in poly bags and transplanted later to the field for raising systematic plantation.

Flat, elevated and well drained land in shady place should be selected for preparation of nursery beds. Generally Kesseru seed mature during February-March and it is necessary to prepare nursery beds beforehand. Land should be ploughed repeatedly to get a fine tilt, remove the weeds and exposed sufficiently to sunshine. Mix sand with the soil, level it and raise the bed 15-20 cm with a bed size (6m X 2m) to accommodate 800 seeds per beds. The top soil of each bed is mixed with 6 cft well decomposed FYM and 50g Malathion dust. The beds are covered with dry thatch or straw for more than two weeks before sowing seeds to check weed growth.

Kesseru plant starts flowering from mid of October and continues till end of January. Fruits start ripening during February and March and the green pericraps turn into grey to black and become delicious for birds. The ripe Kesseru fruits need to be covered with nylon net to protect from birds. The mature fruits collected for seed processing are soaked overnight in water and in the next morning they are to be rubbed with a gunny cloth to remove the pericraps of the seeds. Wash 2 to 3 times in water and select the healthy/viable seeds for sowing through water floating test.

The healthy seeds should be treated with Indofil M-45 or Bavistin @ 3 gm per kg of seeds to control fungal infection.

The ideal season for seed sowing is February to March. Soaking of the seeds in water for 20 hours prior to sowing, results maximum germination. Seeds are sown in 2.5 cm deep and 10 cm apart in rows made at a distance of 15 cm. After sowing, the seed beds are covered with thin layer of dry paddy straw or hays to retain moisture and to enhance seed germination.

Germination takes place after 16-18 days of sowing. Sprinkling of water is necessary immediately after sowing which should be continued at 3-4 days interval for healthy growth of seedlings. Seedlings can be protected from rain/hailstorm by providing shed. Transplant the 3-4 months old seedling in polythene tubes filled with soil, sand and FYM (Field yard manure) in 1:1:1 ratio. Routine manuring, weeding and spraying of fungicides (0.05 % Bavistin), insecticides (0.01 % Rogor) on seedlings should be conducted to protect from disease and pests.

Land preparation should during March to April by ploughing of land to a depth of 20-35 cm followed by leveling is recommended. The weeds should be removed and allow the soil dry sufficiently. Soil erosion on hilly areas can be prevented by terracing or raising bunds. Drains are to be made to avoid water stagnation during rainy season. Pits of 30x30x30 cm size are to be prepared at 3m x 3m spacing to facilitate intercropping. Mix 5 kg well decomposed FYM and 10 gm of 0.065 % Hexalon for each pit. The entire work should be completed at least one week before plantation.

Transplant 14-15 months old seedlings of 25-30 cm height into pits and preferably during cloudy weather or in the afternoon. Transport seedlings carefully to avoid damages of root system. Shading and watering is required for better survival and erect fencing to protect plantation from cattle.

Pollard Kesseru plants at 1.50 m height after 4-5 years to induce more branching and conduct subsequent Pruning at 1.75 m height. Prune side branches 15-20 cm above last pruning ends. Step up and step down pruning should be conducted at every three years intervals during February.

Regular cultural operations like hoeing and weeding are to be carried out as and when required. Young plants are to be subjected for watering during December to April and loosen the soil for providing aeration to the root system. Spray Glyphosate (41%) @ 1.6 litre/180 litre water to control weeds like thatch grass. Raising Castor or intercropping agricultural crops between Kesseru plants during gestation period supports additional income to farmers.

Leaves can be harvested 3 times/year and per plant yield 6-7 kg of leaves per harvest.

Disease and Pest Management of Kesseru

Kesseru plants are less susceptible to disease and pests attack. However, attack of termite is found in hilly region. A beetle pest, which is nocturnal in habit, sometimes damages young leaves of Kesseru Plants.