Sweet potato (Ipomoea batatas) is an annual crop in tropical countries. its vines and roots are used as an excellent source of animal feed. It is high in starch, protein and vitamins. Different varieties of sweet potatoes are planted in the rainy season and harvested after 5 to 6 months. Yield varies from 30 to 35 t/ ha.

The vines, foliage and roots can be used as forage for  cattle, sheep, goat, pig, poultry and rabbit production without any adverse effect on growth, milk and meat production. It also can be used as silage in lean period.

Sweet potato (Ipomoea batatas) is a dicotyledonous plant belongs to the family Convolvulaceae. It is a tuberous - rooted perennial crop . It occupies an important place among the root or tuber crops in India due to rich source of starch.

It is popularly known as ‘Sakarkand’ in all over India and ‘Metha Aloo’ in Eastern and North-Eastern region.

Sweet Potato and its Nutritional value

The tubers along with vines are good source of animal feed and can serve as a substitute for maize. It is high in protein and vitamins. It is a good source of energy and rich in carbohydrate (70% starch), Vitamin A, Thiamin, Riboflavin, Niacin and Ascorbic acid. Phosphorous, Iron and Potassium content is also high.

Tthere is no adverse effect on growth, milk yield and meat production. It can be substituted as a feed for cattle, pig, poultry, goat and rabbit. In lean period processed sweet potato root and silage can be utilized as suitable animal feed. 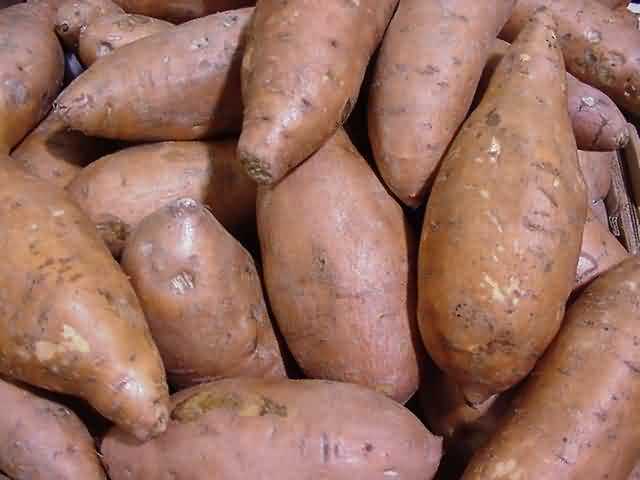 Climate and Soil and for Sweet potato production

It is cultivated whenever there is sufficient water to support their growth. Optimal annual rainfall for growth ranges between 750 to 2000 mm.

When rainfall level is below 850 mm irrigation may be necessary but it should be stopped before harvest in order to prevent the tubers from rotting. Sweet potato is a warm-season annual crop, requiring 20 to 25⁰ C average temperature and full sunlight for optimal development. Growth retards below 10⁰ C.

It can be grown in a wide variety of soils having good drainage except clay, but it is best suited to fertile sandy loam soil. Short day length with low light intensity promotes tuber formation, while long day tends to favour vine development at the expense of root tuber.

The sweet potato tuber flesh colour can be white, yellow, orange and purple, while skin colour can be red, purple, brown and white. The stems are creeping slander vines, up to 3.5 to 4 m long. The leaves colour varies from green to purplish.   Sweet potato flowers are white or pale violet, axially, sympetalous, solitary or in cymes. The tubers are round, elongated and slander. Sonipat-2, H-42, H-620, S-107 and Sree Bhadra are high qualities varieties.

Vine cuttings of 20 to 25 cm length are planted on ridges at a distance of 30 to 40 cm between vines at the rate of 50,000 to 62,000 cuttings/ha. Top and middle portion of the vines are the best plantation material and the vines become ready for planting in the main field 45 days after sowing in nursery. Last week of May to first week of June is the best planting time or in rainy season. It needs a frost free period of 110 to 170 days. Plantation is avoided in winter months. It grows very quickly, has some tolerance of draught also.

Sweet potato roots are adventitious, mostly located within the top 25 cm of the soil. Some of the roots produce elongated starchy tubers. For better production the land should be ploughed upto a depth of 15 to 20 cm and brought to a fine tilth.

The raised beds should be 30 cm height and planting is done in ridge and furrow method. Farm yard manure at the rate of 15 t/ ha must be applied at the time of land preparation. Chemical fertilizer like urea, super phosphate and murate of potash also may be applied at optimum level during land plaughing and after planting as and when required.

Within 5 to 6 months crop mature. The vines are cut before harvesting. The tubers are digging out from soil in appropriate time, because early harvesting reduces keeping quality and late harvesting make tuber fibrous, unpalatable and cracked.

After harvesting tubers are kept under high temperature and high humidity condition for 4 to 7 days for toughness of outer skin and to minimize damage. Yield varies from 30 to 35t/ ha.

After third week of planting it start growing vigorously. If vegetation growths are more, tuber production decreases. Excess vines and leaves may be pruned for optimum tuber production. Pruning of 15 cm top vine after 75 days planting is done to prevent excessive vine growth and to harden the tuber. Before digging tuber at least one week advance the vines are cut. During harvesting also a huge amount of sweet potato foliage are produced.

Animal like cattle, sheep, goat, pig, rabbit etc can consume sweet potato leaves and vines as forage.  It is a good source of protein and contains about 15 to 30% dry matter.  Stem contain less protein than leaves. Lysine is the main limiting amino acid. Unlike legume forages, it does not contain notable quantities of anti nutritional factors.

The vines provide a nutritive and relished green for ruminants, pig and rabbits. It is also a suitable protein supplement for animals rearing on low quality forage. A cow can consume 30 to 50 kg sweet potato forage in a day and could be substituted for other forages. It could help saving production cost for small holders.

The forage has no negative effect on milk quality and sustains low producing milch animals. It has a great potential for improving milk yield at up to 70% in lactation. Sweet potato vines do not have any negative effect on growth performance also.  Mixing of sweet potato forage in sheep ration lower cost in per kg of live weight gain and immediately weight gain.

It provide sufficient crude protein (CP) and metabolizable energy to sustain goat meat and milk production in tropical condition, even during scarce period where standard feeds are lacking.

It also increases feed efficiency. In tropical areas sweet potato vines are one of the promising protein sources for pigs. Due to its high protein content, high CP digestibility (above 65%) it can be used as a valuable protein and amino acid source in low fibre pig diet in tropical areas.

In poultry ration   for supplement of protein, carotenoids, particularly beta-carotene and xanthophylls to enhance the yellow pigmentation of broiler skin and egg yolks dried sweet potato vines can be used. Sweet potato foliage is palatable to rabbits and is common vegetables used for rabbit feeding in Vietnam as the basal diet and even only diet.

Silage preparation from vines and foliage

After harvesting green and healthy material is chopped to 0.2 to 0.5 cm length and prewilted 2 to 4 hours in the sun to restrict moisture content up to 40 to 45%. The prewilted material than thoroughly mixed with 10% rice bran, wheat bran, sweet potato root meal, corn meal or cassava meal with 0.5% salt.

The mixed content than preserved in a impermeable plastic bag by removing air and the preserved mixed content can used as silage during scarcer period. The silage is free of Aflatoxins, Salmonella and Escherichia coli.

In China farmers slice up the fresh roots to make them more digestible or feed them mixed with vines or other household feed. In Papua New Guinea pigs will forage for roots or culls left in the field. Some farmers in China and Philippines boil the roots first and then use as pig feed. The presence of trypsin inhibitors in raw sweet potato decreases the protein digestibility.

In poultry sweet potato root feeding improve dressing percentage. In broiler rabbit production the root can be substituted up to 50% of total maize based ration.

Sweet potato is popularly known as ‘Sakarkand’ or ‘Metha Aloo’ in Eastern and North-Eastern region. The crop is as old as 8000 years and at present it is cultivated for food in more than 100 countries with cultivation area 8.5 million hactre with tuber yield 12648/ kg/ ha. Around the world 15 countries produces nearly 97% of this total production and 65% of sweet potato now utilized as animal feed.

The vines, foliage and roots are used as animal feed which is rich in vitamins, minerals, protein and energy. It does not have any adverse effect on growth, milk and meat production in animals. It is cultivated between 40⁰ N and 32⁰ S up to 2000 m with average rainfall between 750 mm to 2000 mm and ideal temperature for growth is 20 to 25 ⁰C.

The sweet potato colour may vary from red, purple, brown and white. Different varieties of sweet potatoes are available viz. Sonipat-2, H-42, H-620, S-107 and Sree Bhadra is high qualities varieties. The Vines are planted on ridges in rainy season and grows very quickly. Sweet potato located within the top 25 cm of the soil and the roots become elongated starchy tubers.

Crop mature within 5 to 6 months and yields about 30 to 35 t/ ha. When vegetative growths are more pruning of vines and foliage is done for better tuber production. It is an excellent fodder for livestock and produces more milk, meat etc. It is rich in protein and proved promising result in cattle, sheep, goat, pig, poultry and rabbit feeding.

Rabbit relishes the sweet potato vines than other fodder crop. Silage of sweet potato vines is as good as green foliage and free from aflatoxins, salmonella and E. coli. It can be fed livestock during lean period when other green forages are scarce.

1 E-mail: This email address is being protected from spambots. You need JavaScript enabled to view it.