Feed and fodder production for livestock feeding is an important aspect for the sustainability of the system because agriculture and animal husbandry are complementary and not competitive to each other.

The feed resources are by and large the crop residues, fodder, agro by-products and some indigenous feeds. The farmers feed their livestock with available feed resources, which are not balanced in terms of protein and energy to meet the nutrient requirement leading to poor performance.

Shortage of concentrate feed (84%) and green fodder (88%), low land holding, negligible area under fodder cultivation and poor husbandry practices with imbalance feeding in terms of total dry matter and nutrients intake are considered to be the main reasons for less production in the eastern region of India.

Feeding animals as per the requirement and avoiding wastage is the key in exploiting the production potential of livestock for economic viability and sustainability since feed costs are the major part of production that accounts for 60-80 percent. Mostly livestock is to fed in situ the various available crop residues and forages with supplementation of concentrate feed as per production status.

The large dairy animals are required dry matter @ 3kg/100kg body weight in which 60-80 percent should be supplied by green fodder and straw and remaining 20-40 percent should be supplied through concentrate feed. Hence, effective use of total feed resources by livestock is a definite means of increasing performance of animal per unit area of land.

In many situations dietary protein and minerals are main limiting factor for most of the livestock and its requirement not meet from available roughages fed to them (Table 1). An growing calve (6-24 months age) will require to fed with concentrate feed having digestible crude protein (DCP) 16% and total digestible nutrients (TDN) 70% @ 1.5-2.0 percent of body weight to maintain growth rate of 500g/day or above along with green fodder 15-20kg/day.

The DCP & TDN requirement of dairy cow is given in Table 2. Similarly, goat will allow grazing for 6-8 hours daily or providing fodder @ 3.0-4.0 kg green fodder daily during stall feeding system in cut and carries method to ensure daily intake of DM and DCP @ 2.5-3.5kg and 120-130g per 100kg body weight, respectively. Otherwise, little supplementation of concentrate feed (CP 16% & TDN 65%) @ 100-200g/day/head will require depending upon production status.

Table 1: Nutritive values of forage based ration and intake in large ruminants

The locally available native pasture are poor in nutritive value and majority of the cattle and goat of this region meet their nutrient requirement by grazing, but milch crossbred cattle get the fodder by cut and carry system.

Promising and suitable fodder crops shall be identified on the basis of sustained yield of fodders, fast coverage, adaptability in soil condition and more importantly palatability amongst different species of livestock for production in large scale to mitigate the gap. Similarly, incorporation of leguminous forages (15-20% in cereal fodder) that enrich the forages and make it balance in terms of nutrients would be right direction to achieve optimum production from ruminants.

After 5 months of pregnancy, cow/ buffalo should be given 2kg concentrate in addition to maintenance requirement. Frequent change in feeding should not be done. The concentrate feed can be prepared by mixing with grinded maize 35, wheat bran 30, pulses by-product 15, oil cake 17, mineral mixture 2 and common salt 1 part.

Total mix ration (TMR) feeding i.e. called Sani system should be followed which increases feed intake, nutrients digestibility and 13-15% milk production. TMR for one milking cow weighing 400kg and yielding 10kg milk per day can be prepared by mixing chapped straw 2kg, green fodder 25kg and concentrate feed 5 kg. The half of the quantity will be fed forenoon and remaining half in afternoon after mixing with water.

Annual cereal and legume fodder were grown in 3.5ha land for round the year production. Multi cut Sudan as cereal and cow pea, rice bean and soybeans as legumes were grown during rainy season.

Cereal fodder was grown under 85% areas whereas, legumes under 15% areas only since most of the area are under low-land. The cereal fodder oat under 40% areas and legume fodder berseem under 60% areas were grown on same land during winter season in relay system (Photo 1). Fodder yields of different crops during various seasons are given in table 3.

With present annual fodder production, total 120 tonne green fodder can be produced from 1ha land in one year which will be sufficient to meet fodder requirements of 15 crossbred cows round the year (Table 4). 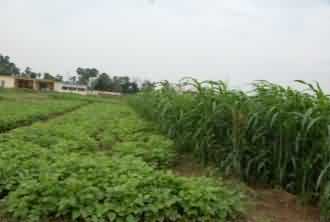 It is evident from the above discussion that, the eastern agro eco-system is mostly constrained by non-availability of quality fodder resources to feed the livestock. But, it is also a fact that enormous potential are available in these eco-system to produce quality fodder, which can be utilized for feeding the livestock to decrease dependence on external inputs. Pasture based ruminant production in cut and carry method of feeding can be encouraged for the sustainability of the system and better on farm feed resource management in watershed.