Eastern region of India possesses large number of ruminant population (162 million) which is equivalent to almost 55 million adult cattle units that depend on available feed resources.

The dry and green roughages contribute to the tune of 80-90 percent in their ration and hence, a total of 184 million ton dry matter is required to feed the present population.

Generally, green fodder contribution varies from 25 to 40 percent in ruminant’s ration depending upon availability. But, at the same time, an acute shortage of green fodder prevails in the eastern part of India that varies from 82 to 89 percent. The main reason behind this gap is low land holding and negligible area under fodder production.

Crop was irrigated after 10d of germination and subsequently top dressing of urea @ 40kg/ha was applied. The crop, barring three plots,was then harvested for fodder use at 70d from 12cm base height (Photo 1a). 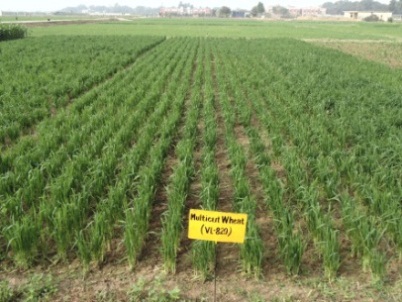 Second irrigation to all plots (cutting & without cutting) was applied just after fodder harvesting and subsequently second top dressing of urea @ 40kg/ha was also applied. Plants further grew and attained almost similar height after 20 days of fodder harvesting, and the height was matching to the plants of plots where fodder was not harvested (Photo 1b). 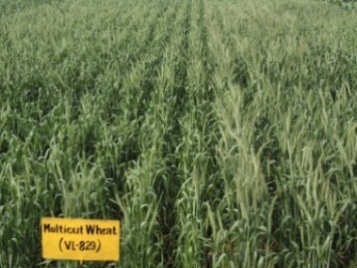 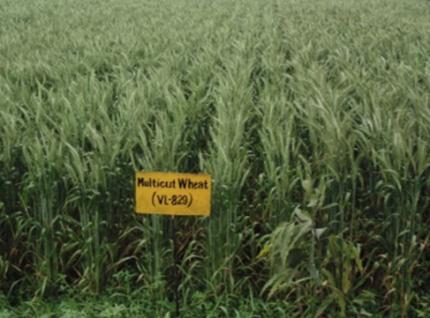 The ear head emergence was started in between 100 and 110 days in plots where fodder was not harvested, whereasthe same was started 10d later in fodder harvested plots (Photo 1c).

The third irrigation was provided at 130d of crop duration to all plots when ear head emergence completed. The matured crop was harvested at the age of 150d crop duration (Photo 1d).

Maximum grain yield of 3.30 t/ha was recorded from plots where fodder was not harvested.  The harvesting of crop as fodder reduced the grain yield to the tune of 5.76 per cent.

Thus, harvesting of fodder did not reduce overall biomass yield potential of the crop. The good quantity of fodder was harvested at 70 d crop duration which contained 17.46% crude protein on dry matter basis. The fodder contained permissible level of dry matter content (15.28%) also.

The digestion trial study was also conducted in heifer calves to know the nutritive value of wheat fodder. Wheat fodder was fed to three cattle heifer calves as sole ration for a period of one week.

Subsequent digestion trial was conducted for 5 days. Fodder offered and faeces voided each day were recorded and the sampleswere analyzed for calculation of nutritive value.

The digestible crude protein and energy values were found to be 12.72 percent and 3095 Kcal/kg, respectively in dry wheat fodder for cattle heifers.

The results showed that wheat fodder was very good in terms of nutritive value and intake point of view.

The farmers of eastern India are generally following paddy-wheat based cropping system.

*Corresponding Author E-Mail: This email address is being protected from spambots. You need JavaScript enabled to view it.