Plasticulture is the use of plastics in agricultural practices; it includes all kinds of plant or soil coverings ranging from mulch films, row coverings, poly-tunnels to greenhouses, lining of farm ponds and micro-irrigation (drips and sprinklers).

It can well be incorporated in the mainframe system within the field of sustainable agriculture practices domestically.Its effective implementation is likely to result in robust food grain production and consequent rise in agriculture gross domestic product (GDP) in excess of 4 per cent. 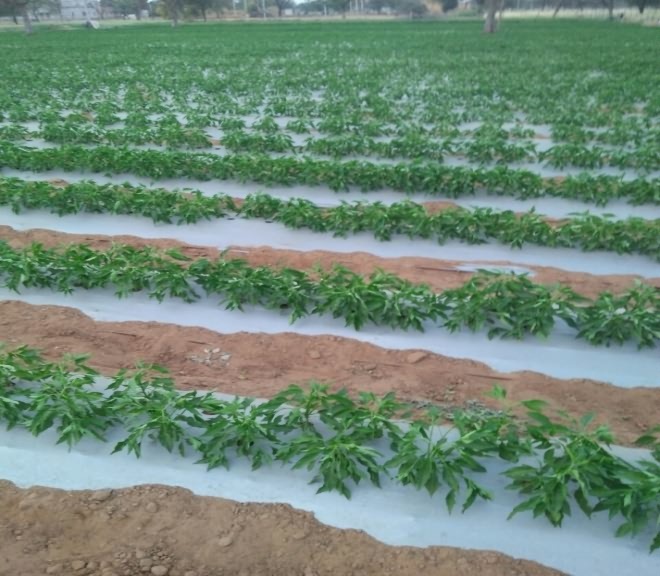 Use of Plastic in Agriculture

Plasticfilm is used for lining farm pond in drought prone areas with highly erratic rainfall. The water seepage and evaporation are major challenges in these areas due to which drop in depth per day of pond water is high. To escape this depletion of stored water, pond sealing is done by installing it with conventional plastic lining.

The HDPE (high density polyethylene), PVC (polyvinyl chloride) and polyethylene are mainly used as the lining material.Drip and sprinkler irrigation components are made up of plastics, i.e. plastic pipes, valves, filters and emitters.

Despite many advantages of plasticulture; plastic mulch in particular is a potential source of plastic entry into our food system. Used plastic sheets for mulching are tedious and expensive to collect and discard or recycle.

Although plastic films in the United States of America, Europe and even India are thicker than 15-20 microns, whereas, chinese films are less than half the thickness of those films and go down to about 8 microns.  That thinness makes the material less robust and more difficult to recover after use. Therefore, most of the farmers leave plastic films in the field or burn it.

Generally, the sheets are not fully removed, as the thin plastic readily tears into small fragments and remain in the soil. As new plastic mulch is applied year after year, soils can become enriched with plastic residues, which may affect the physico-chemical properties of soil.

Micro plastics are defined as plastic particles in the size range of 100 nano meters to 5 millimeters. These are introduced into the environment as a result of plastic use in a wide range of applications; plasticulture is one of such applications. These are mostly result of physical fragmentation of larger plastic products. Micro plastics are pervasive both on land and in the oceans.

The effects of plastic pollution in terrestrial environments remain largely unknown. To date, the majority of research has focused on aquatic systems, as 10 million to 20 million tons of plastic litter find their way to the oceans each year. Estimation of micro plastic load in terrestrial environments is very difficult due to the heterogeneous nature of soil and climatic variability. However, substantial levels of plastic pollution can be expected.

Agriculture crop production system using plastic mulch may be at particularly high risk. Even in areas that don’t employ plastic mulching, farmers may apply micro plastics-ridden sewage sludge as source of water and fertilizer in the peri–urban areas.

The recycling of biological waste from household and industrial units is also a source of micro plastic pollution in ecosystem. The micro plastics from soil ecosystem find their way into the water bodies and adversely affected the aquatic life. 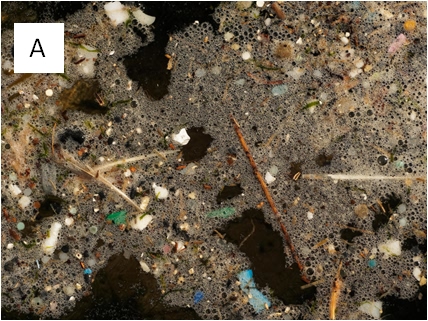 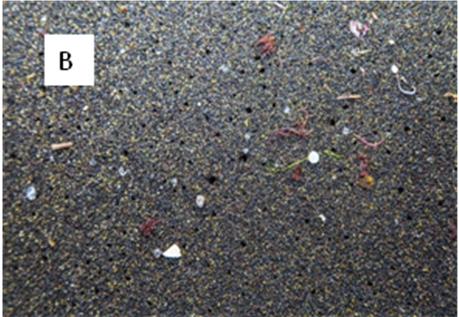 Fig 2. Micro plastics polluting water (A) and soil (B)

A group of Scandin avian and Czech researchers estimated that about 44,000 to 300,000 metric tons of micro plastics are annually added to farmlands in North America and another 63,000 to 430,000 tons in Europe. According to the published research papers the quantities from each region alone, would exceed the estimated 93,000 to 236,000 tons of micro plastics in the surface water of all the Earth’s oceans.

New studies of terrestrial environments are showing that aquatic animals and soil organisms ingest these micro plastics. Small aquatic organisms such as algae, worms, insect eggs and microbes inhabit the floating micro plastic on aquatic surface.Animals higher up in the food web that eat these organisms ingest the plastics along with the prey, setting the potential for harm to reverberate through the ecosystem.

Fragments of plastic film have been shown to release potentially carcinogenic phthalate acid esters (substances added to plastics to increase their flexibility) into soil. The phthalate acid in soil can be absorbed by crops and pose human health risk through food chain contamination.

The fragments of plastic film left in fields can also accumulate pesticides and other chemicals applied during the crop production. Plastics act as a magnet for hydrophobic (water-repelling) organic and inorganic pollutants due to their chemical and physical properties. Persistent organic pollutants such as dioxins, polychlorinated biphenyls (PCB), dichloro-diphenyl-trichloroethane (DDT), and poly cyclic aromatic hydrocarbons (PAH), have been detected in marine plastics.

Plastic residue in soil can negatively affect the native soil organism’s population and diversity. A team of researchers in China reported that soil microbial biomass and the microbes’ metabolic activities were decreased with increasing plastic mulch residues in the soil. The microbes’ functional diversity as measured by their use of different carbon sources was also reduced.

It was also observed that earthworms fed with micro plastic tainted plant litter grew more slowly and died earlier, although reproduction was unaffected. Microplastic exposed earthworms showed increased gut inflammation also. As plastic particles get smaller, a wider range of organisms is at risk of uptake or ingestion, and at the nano scale (<100nm), the particles can enter cells and move beyond the gastrointestinal system.

It has been found that earthworms play a role in transporting micro plastics from the surface of the soil deeper into the ground. In experiments using thin boxes called formicaria that allow observation of the tunnels made by earthworms, the researchers found micro plastics along the tunnels. Earthworms incorporate plastic material into soil, likely via casts, burrows, egestion and adherence to the earthworm exterior. 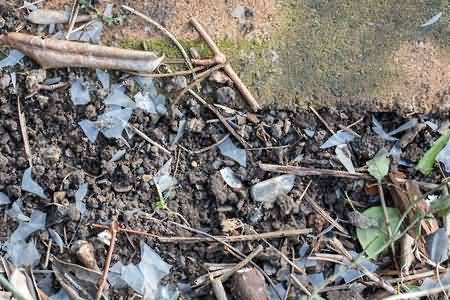 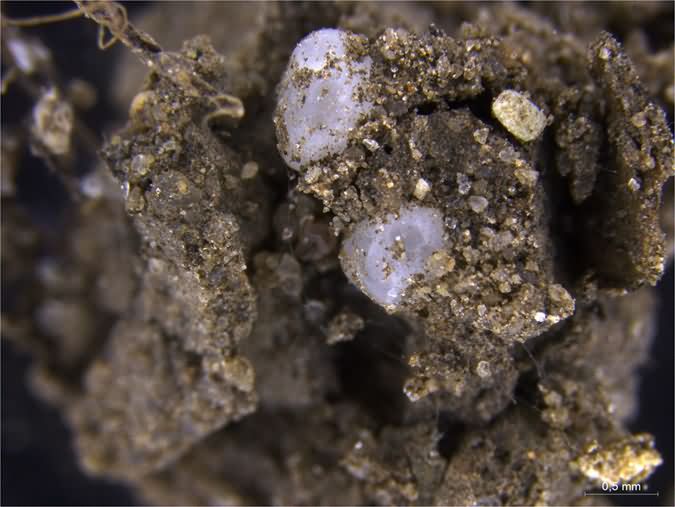 As plastics are finding their way through terrestrial ecosystems, the risks to plants, which form the base of many terrestrial food webs, must be assessed. Microplastics are not likely to be a problem for plants, as they cannot pass through plant cell wallsdue to their large molecular weight. Nanoplastics, however, can get inside plant cells in contaminated soil and water ecosystems.

A study using tobacco plant cells showed that nanopolystyrene beads of 20 to 40 nm were taken up, while beads of 100 nm were not. In the year 2015, a survey was conducted with44 samples of 10 vegetables (capsicum, cucumber, Chinese cabbage, radish, green cabbage, lettuce, chrysanthemum, celery, spinach, and mustard) grown with plastic mulch in suburban greenhouses around Nanjing, China, documented the presence of a group of phthalates in all 44 samples.

This is a risk for sheep, goats and other livestock grazing on crop stalks because of their potential to ingest plastic material or the chemicals that leach from it.When cotton crops are grown in plastic-contaminated soil, there is a risk of lint being contaminated. If that were to happen, the quality of output is downgraded because traces of plastic can interfere with the colouring process.

This could decrease the commercial value of crops, increase consumer anxiety and cause huge losses in traditional cotton growing areas.More research is needed to determine how plants are affected, however, and whether there are any indirect effects in the ecosystem.Microplastics have even been found in salt as our seawater is being enriched with them.

There are alternative natural materials obtained from plants and animals, and newer generation bio-polymers which are biodegradable. As per recent UN report, conventional alternatives to plastics such as paper, cotton, and wood as well as less obvious solutions, including algae, fungi and pineapple leaves can be used in agriculture.

Plastic mulch can be replaced by organic mulch or others like biodegradable materials that come at slightly higher cost. While government’s efforts to ban single use plastics is commendable, there is a need for action that goes beyond bans and address use of plastics across all sectors so that we can avert contamination of our soil, water, food and air.