Castor is a non-edible oil-yielding crop, it requires warm climate, grown in tropical, sub-tropical and temperate regions. Crop is widely grown in India, Brazil, China, Thailand, USSR and USA. India, Brazil and China contribute about 90 % of world production. India is the largest producer and exporter of castor oil in the world.

It is mainly used as lubricant and medicinal purpose. It is also used in the adhesives, plastics, soaps, printing ink, waxes, rubber substitutes, drying oil for enamels, paints, varnishes and cosmetics industries.

Large quantity of castor oil is used in paints and varnish industry. The plant is used as a source of pulp for cellulose, cardboards and newsprint.  The oil cake is used as manure.

Castor oil is unique among vegetable oils due to the presence of a hydroxy fatty acid known as ricinoleic acid which constitutes about 84-90% of the total fatty acids in the oil.

The castor oil is different from other vegetable oils in the sense that it does not freeze even under adverse temperatures of -12 ºC to -18 ºC, the viscosity of oil changes very little with temperature, therefore, considered as the best lubricating agent particularly for both high speed engines and aero planes.

Castor is monotypic because all varieties of castor from giant perennials to short internode dwarf have the same chromosome number. 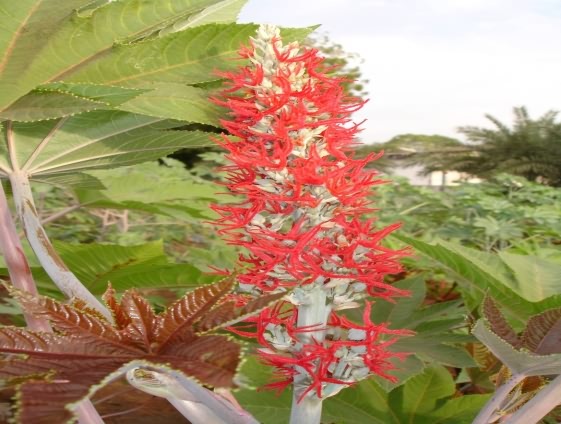 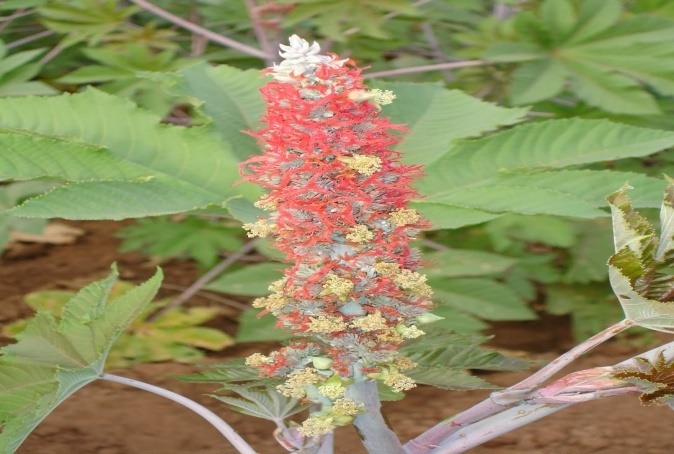 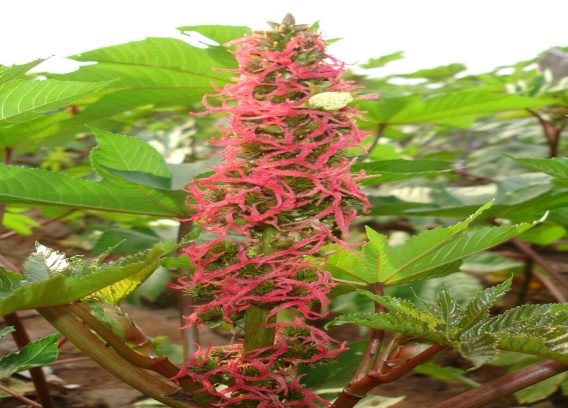 (A) Development of pistillate lines:

Diverse pistillate lines with good combining ability have been developed at Vijapur, Junagadh and Sardar krushinagar

(B) Development of male/inbred lines:

Male line has been developed by sibbing or Selfing. The desired characters are added through back cross.

The line with 100 per sent pistillate flowers is used as female in the production of hybrid castor. Isolation distance for foundation stage seed is 600m for certified seed 300 m is maintained.

Maintenance of 100 per sent pistillate line:

This is most important work in hybrid seed production plot. It is carried out in two steps:

Production of male and female parents and their maintenance is known as foundation seed production.

Castor seed production can be successfully taken up on any type of soil provided they are fairly deep, fertile and well drained. Medium to deep sandy loam and heavy loam soils are ideally suited for seed production.

Since, castor is a deep rooted crop, deep ploughing has been very useful. One deep ploughing followed by two to three harrowing is sufficient to bring the field to the desired tilth.

Castor is monoecious and highly cross pollinated crop. The cross pollination by wind varies from 5 to 40 % depending upon the climatic condition. The seed field must be isolated from other variety field at least 300 m from foundation seed class and 150 meters for certified seed class.

For kharif season first fortnight of July, for rabi mid of September to mid of October.

80 : 40 : 00, NPK kg/ha. Of these, 50 % nitrogen plus all the amount of phosphorus and potash is given as basal dose at the time sowing. Remaining 50 % nitrogen is given in two equal split, first at 40 to 60 days after sowing and second after first picking.

The number of irrigations required varies with the rainfall received. However, usually 2 to 3 irrigations during the entire crop season may be sufficient to avoid moisture stress.

Adequate moisture in soil at time of flowering is necessary otherwise moisture stress at this stage may lead to high proportion of male flowers in monoecious varieties.

The castor field must be kept weed free up to 60 days after planting. 2 to 3 hand weeding / hoeing are sufficient to keep the field clean.

Phytophthora blight and Cercospora leaf spot are the major disesase. Spraying of Bordeaux mixture at 15 days interval or 2 to 3 spray of 0.25 % dithan M-45 may be effective.

Remove all off type plants before flowering. Rogue out diseased plants as soon as they are noticed in the field and take plant protection measures to check the spread of disease. For male parent two rounds of roguing are required, first about 10 days prior to flowering and the second at flowering.

As soon as flower initiation is noticed in primary raceme, reduce the population to 50 % of initial plant stand by roguing of variants in respect to number and the spread of male flowers beyond lower two whorls. After second round of roguing maintain the node number up to primary raceme.

For female parent there will be four field inspections viz., before flower initiation (35-45 DAS), full flowering in primary raceme (60-65 DAS). Besides the routine two rounds of roguing for removal of off-types based on stem colour, internodes type, leaf shape, nodes up to primary raceme, sex expression, branching etc. inspect every female plant regularly for any possible reversion to monoecism at secondary, tertiary and quarternary orders. These plants should be removed and destroyed.

Start harvesting when all the capsules in primary spikes and 1 to 2 secondary spikes start turning light yellow. The picking continues till 2 to 3 months, because the capsules mature unevenly due to sequential development of racemes.

Keep picking-wise seed lot separately, sun dry them, thresh them separately for drawing representative seed samples. Before storage, the seed must be dried to 8 % moisture content.