The pumpkin (Cucurbita moschata Poir.), is an important member of cucurbitace family and is grown extensively during kharif (monsoon) and summer season across India, for tender and immature fruits. Its fruits are consumed in cooked form and also used for preparation of sweets. The fruit juice, flowers, young stem and leaves have many medicinal values.
India is the second largest producer of pumpkin in the world after China (5.768 million tones). Pumpkin, squash and gourd are grown in India over an area of 0.36 million ha, which is highest in the world with the production of 3.50 million tones (FAO; 2005). The average productivity of pumpkin, squashes and gourds is about 9.72t/ha in India, which is lower than the average world productivity of 12.7t/ha. The average productivity of pumpkin, squashes and gourd in Israel and Netherlands is over 45.0t/ha, with the highest average productivity of 55.0t/ha in Netherlands (FAO; 2005). The higher productivity in these countries is due to the coverage of maximum area under hybrids where as OP varieties occupied major area in India and pumpkin are being cultivated by resource poor farmers through self-saved seed.
The demand of hybrid seed among farmers is increasing because of earliness, uniformity and higher yield which make pumpkin cultivation more profitable than traditional/open pollinated varieties. Several hybrids have been developed and released in pumpkin by National Agricultural Research System (Arka Chandan, Arka Surkamukhi, Ambili, Pusa Vishwas, Pusa Vikas and Pusa hybrid-1) but their seed is in short supply. The pumpkin hybrid ‘Pusa hybrid –1’, a high yielding hybrid and is suitable for cultivation in both summer and kharif seasons in northern India. In order to popularize the hybrid seed production of pumpkin among the farmers, the hybrid seed production of Pusa hybrid-1, has been discuss below
Land requirement:
Land to be used for hybrid seed production of pumpkin shall be free of volunteer plants. The field should be leveled, well-drained, fertile, soil pH ranged between 6-7. The selected field should also have an assured irrigation. 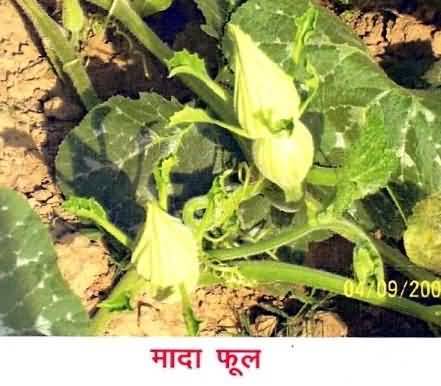 Isolation distance for Hybrid seed production of Pumpkin:
Pumpkin is monoecious (male and female flowers borne at separate nodes on the same plant) and cross-pollinated (entomophilious) in nature. Thus, to ensure the production of higher genetic purity of hybrid seed, the minimum 1000 m isolation between the field of other variety including commercial hybrid of same variety and field of same hybrid not confirming to varietal purity requirement However, minimum 5m isolation between the blocks of parental lines is required in case seed parent and pollinator are planted in separate blocks and hand pollination is to adapted.

Seed source:
The basic seed of parental lines should be obtained from the institute/university where from the hybrid have been developed.

Characteristics of parental lines of Pusa hybrid-1 of pumpkin:
The characteristics of the parental lines are summarized below.
Characteristics of female parent:
Very vigorous growth, average vine length 5 m, leaves are dark green with white spots on surface of leaves, fruits are spherical and medium in size average fruit weight 5 kg flesh is thick and golden yellow in colour, maturity 120 days
Characteristics of male parent:
Vine dwarf to semi dwarf, 2.2-2.5 length leaves small white green with yellowish spots, fruits small and round flat maturity 110 days
Nutrition:
1.0 kg well rotten farmyard manure (FYM), 50g DAP and 25gMOP/hill should be applied as basal dose 5-7 days before planting/sowing of seeds and 50g Urea /hill should be mixed around the plant at 30-35 days old crop. The heavy dose of nitrogenous fertilizer should be avoided otherwise induce the heavy vegetative growth. The spraying of 1% Urea/DAP is also advised during the fruit development separately to obtain good fruit set and development.

Flowering and pollination in pumpkin:
Pumpkin is a day neutral plant and therefore, no problem in flower initiation and fruit set takes place but fruit development are poor when ambient temperature. Pumpkin plant is monoecious and produces both male and female flowers on the same plant, the flowers are bright yellow in colour, and female flowers are larger in size and have more number of nectarines than male flowers. Generally, there is a tendency to produce male flower initially and subsequently the female flower are borne .The frequency of the male flower (30.83/plant) is more than the female flower (4.33./plant) in case of the parental lines of Pusa hybrid-1. The opening of the male flower in pollen parent occurred 46 days after sowing. However, the opening of the first female flower in seed parent occurred at 50 days after sowing.
The anthesis occur early morning around 5.00 am and flowers remain open upto 12.00 pm, and close/weather in forenoon depending upon climatic condition, with passage of time the pollens become sticky and become wet hence pollination must be completed before 7.00 am
The honeybees are the major pollinators in pumpkin. A.florae is the most common followed by A. dorsata, A cerena indica & A mellifera. The bee activity is more between 7.00 am to 9.00 am.

Methods of hybrid seed production:
Pumpkin produces male and female flower on the same plant at different nodes known as monoecious sex form. The phenomenon of monoecious sex form offers the easier emasculation i.e. the removal of male flower before an anthesis from seed parent.
Natural pollination:
In this method, the male flowers are removed from the seed parent before opening regularly with utmost care to avoid the chance selfing. The natural pollinating agent carries out the pollination .

Hand pollination:
In this method, the male flowers from seed parent were removed regularly before the anthesis. The female flowers likely to be opened next day were tied during evening (5-7 pm).  On the same day the male bud in the pollen parent was also tied with coarse thread (plate 1-6). On the next day the male bud are collected and the anthers are rubbed gently over the three stigma lobes. The petals of the female flower are again tied with the thread and label is placed over the peduncle of pollinated female flower. The pollination was performed in the morning between 6-7 am regularly up to 45 days and not allowing the pollens to become wet. 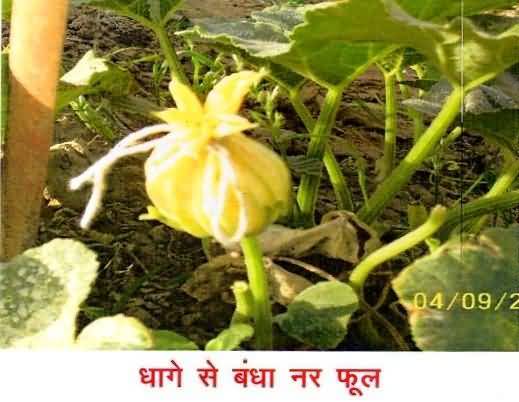 Seed rate and plant spacing:
1.50 kg seed of female parent and 0.50 kg seed of pollen parent is sufficient to ensure the good plant stand among the seed and pollen parent blocks. If germination of the parental seed is higher than the quantity of the seed can be reduced accordingly.
The spacing between the two channels should be 4.0m and plant-to-plant spacing of 1 m is adequate for proper execution of the field operation, monitoring and pollination in case of Pusa hybrid-1 seed production. One seedling /hill should be transplanted. The thinning of extra seedling from male and female hills should be done 15 days after the sowing and single seedling/hill should maintained

Method of planting:
There are two methods of hybrid seed production.
Method I:
The sowing of the seed parent and pollen parent should be done in 3: 1 ratio with in the channels in the repeated manner and the male hills are marked with the painted wooden sticks. The seed should be treated with thiram/captan @2.5 g/kg seed .In downy mildew endemic area treat the seed with apron 35 SD @4 g/kg of seed. The sowing of seed parent and pollen parent should be taken by engaging the labours separately and two seeds /hill should be dibbled at 5-7cm in depth.
Method II:
The block system is suggested to avoid physical contamination during production, harvesting threshing and post harvest handling. In block method, the seed parent and pollen parent are planted in 75: 25 proportions in separate blocks. At the time of anthesis the pollen is collected from the male block. This method ensures the production of higher genetic purity hybrid seeds.

Irrigation and cultural operations in seed production of pumpkin:
The irrigation is given in open field as per the requirement of the plant i.e wilting should not be allowed and the irrigations is arranged during early morning before 11am or evening after 4 pm. Two to three hand weeding are required to keep field weed free.

Stage of rouging:
The hybrid seed plot has to be rouged thoroughly and various stage of crop growth.
Fruits regulation:
The number of fruit set range 1.78 to 3.27 per plant with in 45 days after the anthesis of first female flower. The fruits develop through open pollination after the specific time of the control pollination is removed periodically to maintain the source sink relationship and to avoid the chance admixture. The retention of number of fruit per wine in hybrid seed production had greater impact on seed quality attributes viz., 1000 seed weight, germination and seed vigour. The fruit regulation per wine affects the seed yield i.e. less the number of fruit/ vine lower the seed yield and vice-versa.

Maturity and harvesting:
Sufficient time must be allowed for the seed to reach maturity, which is at least 35-40 days later than the optimum stage of harvesting the fruit for fresh market (10-05 days later of anthesis). The maturity of fruit for seed production can usually be confirmed when the colour of the fruit turn from green to golden yellow that is usually attained 50-55 days after the pollination of the female flower.
The golden yellow colour mature fruits are harvested two to three time and over ripening of the fruit are avoided to over come the problem of desiccation and damage to the fruit. In case of one time harvest the fruit set at early growth stage spoiled by the Aspergillus fungi.

Seed extraction and drying:
The hybrid seed production of most of the cucurbits are being organized in a smaller area (0.25-0.50 acre), therefore, seed extraction is done manually. The fruits are slit or cut open with help of knife and then seed is scooped out from the pulp. The seed extraction should be done over concrete floor or tripolene to ensure hygiene of seed. In order to facilitate the quick and easy extraction of seed from the pulp, the mature fruits are kept for 6-8 days for curing. The seeds are washed with clean running water thoroughly to remove the fruit portion, mucilage and the unfilled seeds and are subjected to shade drying for one day and then seeds are subjected to artificial drying, the initial air temperature is usually 380 C to 410 C and there after the temperature is reduced to 320 C –35 0 C. The drying is continued until the seed moisture content does not exceed 10%. They are dried to moisture content of 6% for vapour proof storage.

Plant protection measures:
One-teaspoon carbofuran (3 g) should mixed per hill at the time of sowing. The 3-4 spray of carbryl (sevin) @ of 1g/1little of water to control the red pumpkin beetle during the early crop growth stage is suggested. The four alternative sprays of dithane M-45 and ridomil may be given to check the incidence of downey mildew at 10-12 days interval.