After independence our nation's primary aim was to achieve self-sufficiency in the food production. To achieve this aim we incorporated the primary means of maximizing the yields of agricultural crops through use of fertilizers, pesticides and other chemicals besides improving the inherent quality of the seeds. Though it helped our nation in producing the food for ever-increasing population but the unsustainable path used to maximize the yield caused some grave concerns like that of groundwater pollution. Nearly five decades after the Green Revolution the sustainability of Indian agriculture, and thereby the country's food security, are both facing a serious challenge. 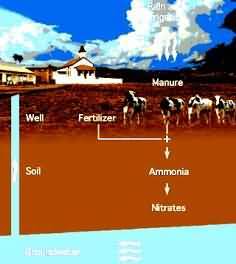 Water is vital to life, maintenance of ecological balance, economic development and sustenance of civilizations. Planning and management of water resources and its optimal use are a matter of urgency for most countries of the world, and even more so for India with a huge population. Growing population and expanding economic activities exert increasing demands on water for varied needs - domestic, industrial, agricultural etc.

Groundwater occurs as one of the important resource and is being tapped for irrigation and public health water supplies for providing drinking water. On the other hand, quality of water resources is getting degraded with increasing urbanization and industrialization. The quality of both surface water in the rivers and groundwater is getting deteriorated due to industrial water pollution, pollution due to disposal of municipal waste water and drastically due to increasing use of agrochemicals, fertilizers etc.

The synthetic fertilizer usage in the country shows significant variation from region to region. However, in the most agriculture intensive districts (78 districts out of 528 major districts in India), synthetic N-P-K (nitrogen, phosphorus and potassium) fertilizer consumption is more than 200 kg/ha, a rate that is twice the country average. Six crops ,rice, wheat, cotton, sugar cane, rapeseed and mustard consume about two-thirds of the synthetic fertilizer applied. The irrigated area, accounting for 40 per cent of the total agricultural area, receives 60 per cent of the total fertilizer applied.

Nitrogen fertilizers are most important for the growth of plants and hence are used in highest proportions. In the year 2006-07, out of a total consumption of 21.7 Mt of N-P-K nutrients, N alone comprised 13.8 Mt, which is roughly two thirds of the total fertilizer consumption. For instance, while the recommended ratio between N, P and K is 4:2:1, the actual ratio in 2005-06 in Punjab was 20:6:1 and in Haryana 30:9:1, indicating a huge overuse of Nitrogenous fertilizers.

Much of this N is used inefficiently, significant amounts escape into the air, or seep into the soil and underground water, which in turn results in a host of environmental and human health problems, from climate change and dead zones in the oceans to cancer and reproductive risks.

Since crop utilizes only 25 to 71 per cent of total nitrogen fertilizers (Powlson et. al., 1986 and Williams, 1992), rest of it either remains in the soil or is lost from the soil-plant system through leaching, denitrification or ammonia volatization. A significant amount of applied fertilizer move into deeper layer of soil due to percolation as nitrate and ultimately joins the groundwater.

The higher concentration of nitrate is considered carcinogenic and produces blue babies. Blue baby syndrome (or Methaemoglobinaemia) is a disease of bottle-fed infants, which occurs when nitrate level increases beyond 22.6 mg/l Nitrate-N in drinking water (Young, 1975).

The oxygen carrying hemoglobin reacts with nitrate to form Methaemoglobin which hampers transportation of oxygen causing infants to appear blue. If the concentration of Nitrate-N in ground water reaches 50 mg/l, it may cause gastric cancer in adults. The function of central nervous system (CNS) may also be adversely affected by nitrate rich water.

Groundwater remediation is very expensive and usually not feasible, so prevention of pollution is the key to the solution. A feasible and viable check on this problem can be initiated as first assessing and marking the areas which are more prone to become contaminated as a result of excessive use of Nitrogenous fertilizers. Once identified these areas could then be enforced with restricted fertilizer use or may become focus of attention at preventing contamination of the underlying groundwater sources.

The pollution vulnerability maps of the affected regions of the nation can be useful for both land-use planning and for groundwater quality monitoring. They may also provide information to law-makers, land-use planners and developers regarding the spatial distribution of the vulnerability to the pollution. The recent increase in emphasis on environmental protection is demonstrated by the formulation of many laws that aim at preventing rather than repairing environmental damages.

In USA, Canada, Australia and other advanced countries, ground water has been mapped for its vulnerability to different kind of pollutions and laws has been enforced in pollution prone areas regarding use of fertilizers, pesticides and other pollutants.

The construction of groundwater pollution maps can be considered as a critical first-step in implementing groundwater management programs. The more we delay it now, the more difficult it will be for us to conserve our fragile natural resources in future. The identification of the vulnerable area is the key need of our country. Vulnerable areas should get intensive efforts to maximize the efficiency of nitrogenous fertilizer to reduce the risk of nitrate pollution from fertilizers. The application rates should be adjusted to ensure both optimum crop yields and permissible nitrate leaching loss and it must be followed in strict laws so as to safeguard our basic human right to safe drinking water.