Accumulation of excess salts in the root zone resulting in a partial or complete loss of soil productivity is a worldwide problem. Soil salinity has caused heavy loss of national wealth in India. Out of 329 million hectares of land in the country, about 175 million ha (53 %) is suffering from degradation.

The extent of this problem area as given by different sources varies from 8.56 M ha to 10.9 M ha. According to Central Soil Salinity Research Institute (CSSRI), Karnal, 1.7 M ha of land is affected by salinity among the 6.7 M ha of salt affected land. World as a whole is losing at least three hectare of arable land every minute by soil salinization.

The problems of soil salinity are most widespread in the arid and semi-arid regions. Soil salinity is also a serious problem in areas where groundwater of high salt content is used for irrigation.

The most serious salinity problems are being faced in the irrigated arid and semi-arid regions of the world and in these regions that irrigation is essential to increase agricultural production to satisfy food requirements.

There are several reasons for development of salinity in the soils such as,

Salinesoils are rich in soluble salts such as sodium, potassium, calcium, magnesium, chloride, sulphate, carbonate, bicorbanate etc. that leads to alkaline pH of soil i.e. 7 to 8.5.

Since, these soils are rich in soluble salts electrical conductivity (EC) of these soil is higher i.e.EC > 4 dSm-1.

Also these soils are having considerable quantity of sodium but not as sodic soil that leads to low exchangeable sodium percentage (ESP) and sodium adsorption ratio (SAR) i.e. ESP < 15 and SAR < 13.

Effect of salinity on crop growth and development

But these soils are potentially productive soils and their potential can be improved by proper ameliorating techniques.

The main objective of amelioration is reducing the quantity of soluble salts from saline soil.The following technologies can be followed to reclaim the saline soil.

It is removal of the salts that have accumulated on the soil surface mechanically. It has limited success and may temporarily improve crop growth.

This is the most effective management technique for removing salts from the root zone of soils. Stagnation of fresh water can dissolve the salts in the field. Now this water with dissolved salts can be drained out from the field.

This way salts can be leached from the salt affected field. Leaching should preferably be done when the soil moisture content is low and the groundwater table is deep.

Leaching during the summer months is less effective because large quantities of water are lost by evaporation. If adequate fresh water is not available, lesssalinewater (EC 0.25 dS/m) also can be used.

Poor drainage condition leads to accumulation of rain water in low lying areas during rainy season. If it is not drained out properly the groundwater table is raised to less than 2 m within 5-10 years and result accumulation of salts due to evaporation from the surface.

In general, the critical depth of water table ranges between 1.5 to 3.0 m to check the salinization. So drainage is necessary to prevent salinization.

Sprinkler or drip irrigation is ideal method for irrigating frequently and with small quantity of water at a time. Leaching of soluble salts is also accomplished more efficiently when the water application rates are lower than the infiltration capacity of the soil and such a condition cannot be achieved by flood irrigation methods.

6. Proper use of irrigation water

Salt free or less saline (if salt free water is not available) water only to be used.Moistureshould be kept at optimum field capacity to check the salt accumulation.

Generally saline soils are low in fertility status.  Response of nitrogen is better when it is applied with green manures and green leaf manures such as dhaincha. However, excessive fertilization on a highly saline soil is of no value. Uses of acid forming fertilizer such as ammonical and amide form help to drop the pH level of soil.

Soil salinization is particularly high when the water table is shallow and the salinity of groundwater is high. Mulching can reduce evaporation from the soil surface and encourage downward flow of soil water there by check the accumulation of salts on soil surface. 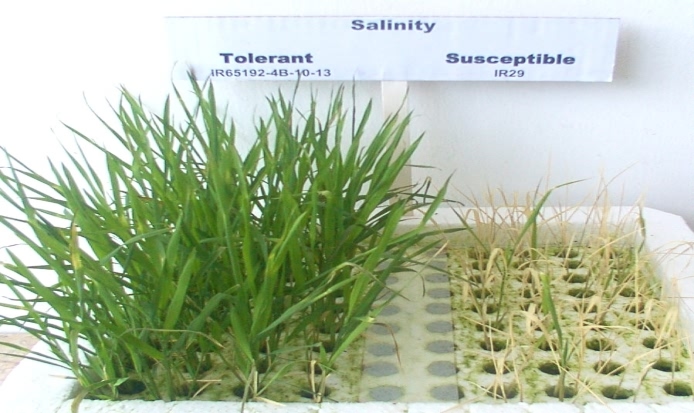 9. Placement of seed or seedling

Salts tend to accumulate at the raised portion of soil. So planting or seeding at sides or shoulder of ridges help them to emerge in saline soil.

Gypsum – can be an amendment for saline soil?

The application of an amendment such as gypsum may not be essential for desalinization but can hasten the process by maintaining a higher infiltration rate by continuously supplying soluble calcium to the leaching water.

Saline soils are barren but potentially productive soils. All the problematic soil are need to be rectified and made to be productive to ensure the food security of ever growing population. Soluble salts concentration of saline soil can be minimized by the above technique and made into productive.

Tolerance of crops to be improved through salt resistant root stocks, genetic and molecular approach those further helps to get higher yield in saline soils.

Growing of crops on the shoulder of ridges

(note that root portion is safed from zone of salt accumulation)

*email: This email address is being protected from spambots. You need JavaScript enabled to view it.