However, some minor adjustments are needed in production technology to make potato based cropping system profitable. The advantages of intercropping are well recognized in India where the holdings are very small  to medium and the land under cultivation is limited. Intercropping allows complimentary use of available resources like water, space, light and nutrients for conversion to biomass more efficiently as a result of difference in competitive ability of different intercrops for these resources.

This efficient utilization of resources leads to yield advantage and gives increased yield stability as compared to sole cropping of the component crops. Studies have shown that, in the hills of Shimla, the growing season can be better utilized by intercropping of potato (Solanumtuberosum L.) and French bean (Phaseolusvulgaris L.), which not only gives yield advantage but also provides insurance against unpredictable weather that sometimes cause heavy loss .

This may be due to late blight and other pest and disease in potato crop. Maximum advantage from potato + French bean intercropping was obtained when they were planted in 2:2 row ratio with 2 rows of potato at 60 cm planted between 2 paired rows of French bean (30/120 cm). However, the nutrient requirement of French bean is different. In this popular paper, results of field experiments conducted at in north western hills have been reviewed.

Mostly Kufri Jyoti anf K. Giriraj are most suitable for intercropping. French bean varieties used in the system are mostly high yielder or hybrids like Contender.

Intercropping of French bean in potato is being grown in most of the area in the mid hills of north western Himalayas of Himachal Pradesh and in a wide range of soils. However, the best yield of potato and French bean has been obtained in sandy loam in texture with well drained soils.

Select a field which should have approximately 5-10% slope. After harvesting the previous year crop, plough the field with desi plough and keep the soil exposed so that it may absorb moisture/ rains/ snow during winters.

After melting of snow, level the field by planking in order to conserve moisture in the soil which is required for proper germination. Remove ground keepers or volunteer if any which are unpicked potato tubers left over from previous crop of potato. Lastly, plough the field twice or thrice with desi plough followed by planking before planting potato.

Seed rate is 30-40 q/ha and spacing is 60 x 20 cm (row x plant). Make furrows across the slopes at 60 cm distance between the rows. Making the furrow against the slope and not along the slope is necessary to avoid soil erosion and conserve more moisture in the soil during less rain situation.

Make 4-5 m wide beds providing a drainage channel between beds to drain out excess rain water during heavy rain season. Apply FYM and basal dose of NPK fertilizer mixture in furrows and mix in soil with Khilna (hand tool) to avoid direct contact of fertilizer mixture with tubers and otherwise plant emergence may be affected or less.

Tubers are covered immediately after planting  of potato by making small ridges of 10-15 cm height over the furrows. At equal seed rate cut tubers do not give  yield as whole tubers. This may be due to the fact that cut tubers perpetuate certain diseases and rottage leading to poor emergence resulting low yield of potato.

Similarly, 50% of sole crop population was maintained in inter cropping of French bean sown at 15 and 10 cm plant spacing, respectively, therefore 50% of the sole crop recommendation was considered the full recommended dose in these situations.

Planting of potato and French bean was done in the second fortnight of April or within 20 days of potato planting. Both the crops were raised with standard package of practices. 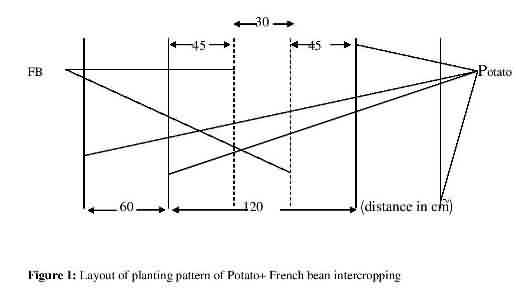 Potato as well as French bean is very nutrient exhaustive crop, therefore, to get  better production and profitable return from the intercropping, efficient management of nutrients is required.

Phosphorus and potassium application is done normally as basal at the time of potato planting at the rate of 100 kg /ha each nutrients.  Application of farmyard manure (FYM) @ 30 t/ha has been found beneficial. If available apply half  of FYM immediately after harvesting the previous year crop and remaining half at planting of the current year crop.

Potato was harvested during mid September, whereas, picking of French bean pods was done  twice or thrice during June to September. Dig potato tubers in last week of August for immediate sale as the skin is immature and it can not be stored. However, if the harvesting is delayed for any reason or in certain other sequential and intercropping systems and the skin is hard and mature tubers may be stored by March.

Yields of potato and French bean based on research conducted by CPRI, Shimla in the region vary widely and ranges from 200-250 and 110 q/ha, respectively as a sole crop.

Yield advantage in intercropping occurs because component crops (viz., potato and French bean) differ in their use of growth resources in such a way that when they are grown in combination they are able to complement each other and so make better use of resources than grown as sole crops.

French bean adds nitrogen by fixing atmospheric nitrogen in root zone and it act as a green manure. On an average the potato yield in the intercropping ranges from 190-200 q/ha and the French bean yield 60-80 q/ha.

Based on the reviewed of results, after adopting most of the recommended practices spends around Rs. 55-60 and 18-20 thousand /hectare for cultivation of potato and French bean. For intercropping, the cost of cultivation is around also Rs. 55-60 thousand /hectare. The gross return on potato and French bean as the sole crops, works out to Rs. 53100/- and 48000/-taking potato price to be Rs. 450 and 600/- per quintal. In the intercropping system potato+ French bean returns Rs. 67250/- per hectare. Therefore. Net return from intercropping is more Rs 14150/- and 19250/- per ha from from pure potato crop and from pure French.

It may be concluded that in a potato + French bean (2:2) intercropping system in which two rows of French bean (paired at 30 cm) were sown after every two rows of potato planted at 60 cm gave high French bean pod yield, potato-equivalent yield and net return from the potato +French bean  intercrop. Similar soil conditions are required for  both crops. small holdings of farmers as well as due to economic considerations farmers may adopt or  go for intercropping of French bean in potato to get higher productivity.