Barley is considered as fourth largest cereal crop in the world with a share of 5.5-6% of the global cereal production. It is grown nearly by 100 countries worldwide and during 2012-13, barley occupied 0.69 m ha area in India with 1.75 million tonnes of grain production.

Barley is frequently being described as the cosmopolitan of the crops and also considered as industrial crop for malt production. Malt is used in beer, hard liquors, malted milk and flavourings in a variety of foods. Barley malt can also be added to many food stuffs such as biscuits, bread, cakes and desserts. 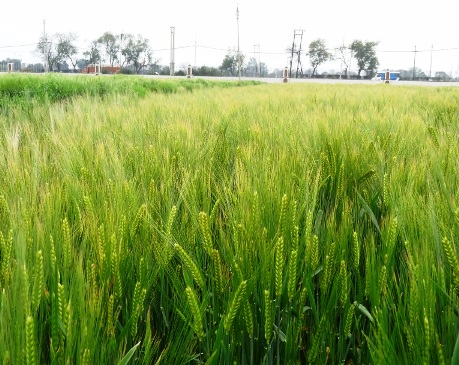 It was identified during 52nd AICW & BIP workshop at CSAUA&T, Kanpur and subsequently it was also released and notified by the Central Sub-committee on Crop Standards, Notification and Release of Varieties for Agricultural Crops (CVRC) vide Gazette Notification S.O. No. 1146 (E) dated on 24th April, 2014 for irrigated timely sown conditions of North Western Plains Zone (NWPZ).

DWRB 92 is erect type in growth habit with dark green foliage colour. DWRB92 had mean maturity of about 131 days and having average plant height of 95cm.

The evaluation of multi-location grain samples for malting quality traits was undertaken for three years. The micro-malting analysis was performed and observations were recorded on different grain and malt quality traits as per the EBC (European Breweries Convention) procedures.

* This email address is being protected from spambots. You need JavaScript enabled to view it.